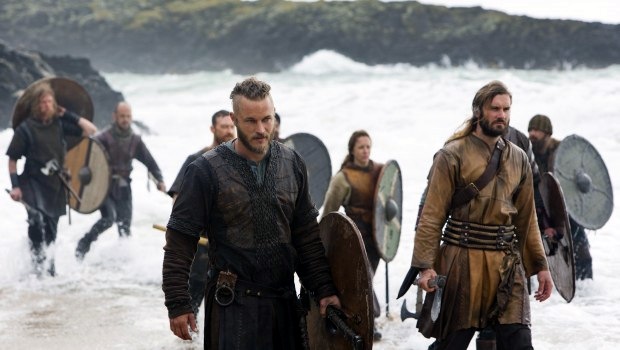 Summary: For anyone missing Game of Thrones, this will fill the gap nicely.

I missed Vikings when it was broadcast on TV last year but in many ways its been much more enjoyable to swallow it up in one gulp, rather than one episode a week. The first season tells the story of Ragnar (Fimmel), happily married to Lagertha (Winnick), but frustrated in his ambitions by his conservative leige lord Earl Haraldson (Byrne). Tired of waiting for permission to explore the lands to the west, Ragnar commissions and designs his own boat, and sets off to sea with a small band of likeminded warriors. Word of their brutal raid on the peaceful settlement at Lindisfarne soon spreads, as does news of the huge wealth of the English; Ragnar’s fame spreads, igniting the jealousy of Earl Haraldson as well as his older brother Rollo (Standen), a fierce and ambitious fighter who nevertheless lacks Ragnar’s vision.

Vikings was conceived and written by Michael Hirst (The Tudors. Elizabeth) and it was my great good fortune to be invited to hear him and cast member George Blagden discuss the programme at the British Museum last week. Until recently, very little had been known about the Vikings; they were generally dismissed by their enemies as fierce fighters, little more than animals. The popular image of hirsute men in horned helmets has been hard to shake off. They were definitely hairy, but many of them were not raiders, most stayed quietly at home farming. They were surprisingly clean (perhaps not by our standards!), had a rudimentary democracy, and suprisingly progressive attitudes to women, as well as their own artisan culture; they were boatbuilders, traders, explorers, slavers. The show, while not a documentary, takes us deep into Viking society, showing their religion and culture as well as the bigger, world shattering events.

That’s not to say there isn’t plenty of blood and action, though less sex and nudity, and perhaps complexity, than an HBO show – maybe because its too cold in Norway? For anyone missing Game of Thrones, this will fill the gap nicely.