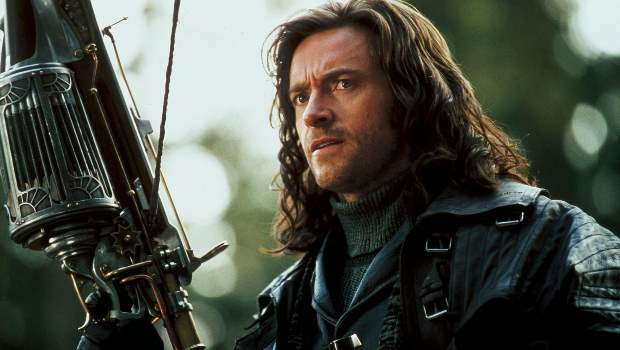 Summary: Thirteen year old boys will love it. Its bound to make lots of money on its opening weekend, and is open-ended enough for a sequel.

I really wanted to enjoy Van Helsing. It had all the ingredients for a fun night at the cinema – vampires, werewolves, Frankenstein, Hugh Jackman… But if film-making can be likened to baking, someone forgot to add the baking soda.

It begins promisingly enough, with a black and white hommage to Universal’s original monster movies that introduces Frankenstein, the monster, and Dracula (a ridiculously ponytailed Richard Roxburgh, like a cross between a used-car salesman and a pornographer), before moving the action to Paris, where our hero, Van Helsing (Jackman), has been dispatched to take down Mr Hyde. Alan Moore has a lot to answer for! Mr Hyde was meant to be a shrivelled little creature, not a massive, unconvincing, CGI gorilla. Van the Man swiftly dispatches Hyde using some sort of spinning Ninja stars, which he then never uses again in the whole film.

Van Helsing is employed by a secret order of monks, the Catholic equivalent of the CIA, to deal with monsters, demons, and the forces of darkness. After picking up his new gadgets from Q… I mean Carl (David Wenham), Van Helsing travels to Romania to help out Princess Anna (Beckinsale). I didn’t really understand why, other than that she and her brother were the last of their family. It’s at this point that the film falls apart, and tries to compensate by turning up the sound levels.

If I understood it right, Dracula and his babes, who have moved to Anna’s territory and are terrorising the local peasantry, have invented a new way for vampires to breed. The babes have been very busy, laying thousands of eggs. But the final spark needed to give them life is lacking, so Dracula needs to recreate Frankenstein’s experiment. And then there’s a whole subplot about werewolves being the only things that can take on Dracula. But all this is an excuse for one (v)amped up action set-piece after another, mainly involving the cast swinging on ropes in front of CGI castles.

What annoyed me most was the way the monster rules have been disregarded. Vampires can go outside as long as it’s a bit overcast. Werewolves are only werewolves as long as the moon isn’t actually covered by clouds (they should all move to Scotland, they’d be fine). Though they live next to Dracula’s castle, villagers think nothing of wandering about after dark (they need to chat to the citizens of Sunnydale). The CGI is poor and effects often look rushed, and the script is trite when it isn’t lame. I felt sorry for Hugh Jackman, who did his best with terrible material. Kate Beckinsale, post Underworld and now this, risks typecasting.

There’s one scene where the director does manage to pause for breath and create an interesting image; a pan past a mirror at a crowded masked ball reveals Anna dancing alone, the only human in the room. And there’s the odd moment of camp fun. But then we’re straight back on the ropes. And the ending, where a ghostly Anna is reunited with her family in the clouds over Van Helsing’s head, had the audience I was with in stitches.

Thirteen year old boys will love it. Its bound to make lots of money on its opening weekend, and is open-ended enough for a sequel. Give this leaden franchise maker a miss, and see Eternal Sunshine of the Spotless Mind, or Shaun of the Dead, instead.