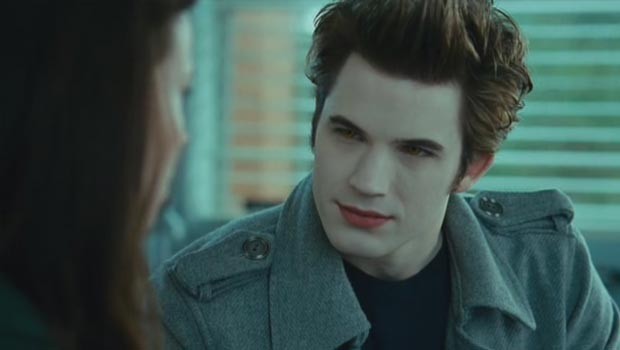 Some “creatives” working in the movie industry seem destined to work forever regardless of the quality of their output. One such writing and directing duo is Jason Friedberg and Aaron Seltzer who are the men behind the numerous goofy spoofs such as Scary Movie, Date Movie and Epic Movie. But while Scary Movie saw them assisted by several other writers, they have slowly become the sole writers on movies that have become less funny to watch and more painful to bear. Meet the Spartans and Disaster Movie landed in 2008 and were duely up for numerous Razzies for the pair, including worst movie. Now Vampire Sucks – a timid lampoon of The Twilight franchise – also seems destined for mockery rather than making a mockery of the intended target.

Aimed squarely at making fun of the sullen relationships that develop between vampires and humans in Twilight, Vampires Suck sees Becca Crane (Proske) as she moves to the town of Sporks to stay with her father Frank (Bader), the local sherif. As a loner, Becca doesn’t quite fit in and struggles in the new school until she meets Edward Sullen (Lanter), whose family are eeriely pale and have a serious aversion to smiling. She quickly falls for Ed who spends move of the movie doing things in slow motion while pouting, however when her childhood friend Jacob (Riggi) makes a play for Becca, things get hairy – Jacob is a werewolf who won’t give up the chase easily.

Camp werewolfs, Lady Gaga and an awkward teenage seduction sequence are actually the highlights of a movie that follows in the footsteps of previous Friedberg and Seltzer offerings. Their sight gags are laboured and every line is intended to be funny, yet only one in ten come anywhere close to teasing out a laugh – you’ll be as sullen as Ed by the closing credits – if you make it that far. The writer/directors seem to think just rehashing scenes from their targets with things going wrong or ridiculous objects suddenly appearing is enough to make a spoof, and it’s no suprise that the scripts they have not produced themselves have never seen the light of day. Only Friedberg and Seltzer could film this dross with the belief they are making even a half-decent comedy. Vampires Suck really does suck.