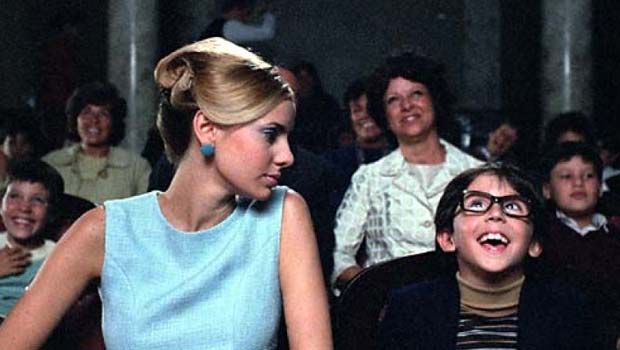 Summary: After a plodding start Valentin wins you over slowly but surely, and is a convincing reminder that good cinema can be found in the most unlikely places.

From modest ambitions Valentin makes a big emotional impact. Alejandro Agresti, Argentina’s answer to Pedro Almodovar, has elegantly reconstructed the ninth year of his own turbulent childhood in this moving drama of relationships; both soothing and sour.

Valentin (the adorable Rodrigo Noya) is Agresti’s on-screen alter ego in the making, a precocious little mischief-maker who dreams of becoming an astronaut. Resembling a young Austin Powers, Valentin builds model spacecraft, a million miles away from mission control, in his grandmother’s Buenos Aires tenement. He lights up the local neighbourhood with his goofy inquisitiveness, peering out from behind huge milk bottle spectacles. Aided by an entertaining voice over that enlivens the film throughout its most bittersweet passages, Valentin ponders the whereabouts of his absentee mother, and tries to come to terms with the reasons that made her leave. It is only when his ill tempered, womanising father (played by the director Agresti himself) makes an appearance midway through the film that the causes of Valentin’s parents’ estrangement become evident; his father’s bullying quickly manifests itself as the chief cause, even though Valentin is burdened by the feeling that he had something to do with it.

Valentin spends the entire film trying to understand the adults that inhabit his world with little success. His innocent meddling in the messy relationships that surround him provides the film’s overriding appeal. Endowed with a childish curiosity that knows no bounds Valentin forces the people he cares about to examine their own lives. He strikes up a friendship with one of his fathers’ former girlfriends Leticia (Julieta Cardinali) and repeatedly attempts to bring his reclusive piano-playing neighbour Rufos (Max Urtizberea) out of his shell. Agresti composes a series of scenes where Noya is paired off with these members of his surrogate family. These unhurried encounters reveal likeable and well-rounded characters. Nothing is forced, and in the mode of European cinema plot is sacrificed at the altar of character. Nowhere is this more apparent than in Valentin’s relationship with his grandmother Aguela (played by Almodovar regular Carmen Maura) he bemoans her crankiness, instilled with the bitterness of being widowed, but enjoys listening to her reminiscences about the past life her and his grandfather shared. In one specific scene, Maura recounts their passion for dancing the Tango and Noya’s reaction is utterly moving. It is so refreshing after being barraged with annoying kids in Hollywood movies for years to witness Noya’s central performance. He is cute without being cringe-worthy precisely because the filmmakers don’t milk the ooooooo! and ahhhhhh! Factor. He isn’t forced to jump through hoops to get a reaction out of the audience.

This deeply autobiographical film is a modest and realistic exploration of human relationships filtered through the eyes of a child. Agresti remains true to his diminutive hero, never breaking off from his point of view in an attempt to over-complicate the drama. Instead what we are presented with is a bi-level drama that takes in the child’s confused position amidst a bunch of complicated adults whilst also subtly allowing us to see the finer, more extraneous and uncomfortable issues which exist between men and women for ourselves; subtleties that Valentin is too young to comprehend. The result is a warm, honest and ambling little story that avoids over-sentimentality and gushiness.

Valentin is ultimately a very hopeful little movie touched with a streak of optimism that runs throughout amidst the acute moments of loneliness this unfortunate boy suffers. Rodrigo Noya’s effortless performance makes you want to just pick him up and give him a big hug. His continual chirpiness only serves to make him all the more loveable by the end. After a plodding start Valentin wins you over slowly but surely, and is a convincing reminder that good cinema can be found in the most unlikely places.