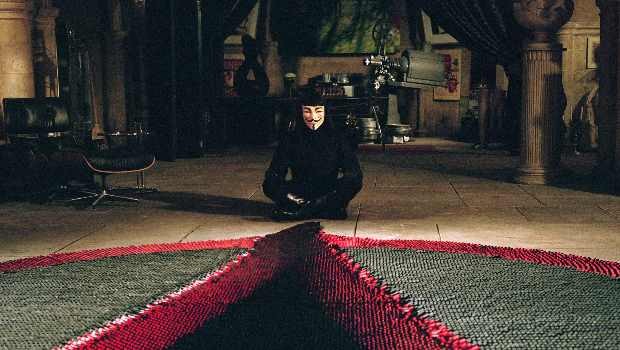 Summary: Despite these flaws, and an occasional lapse in pace from McTeigue and the Wachowski brothers’ script, V For Vendetta remains an immensely intriguing film.

In a dystopian near-future Britain, an American war that has spiralled out of control has led to increased terrorist attacks, detention camps, and the seizure of power by a fascist authoritarian party that controls the populace through violence and intimidation, spoon-feeds them propaganda and disinformation through a state-controlled media, and brutally suppresses dissent wherever it rears its head. Appearing out of nowhere to lead the fight back is the anarchist ‘V’ (Hugo Weaving), an enigmatic killer dressed in a Guy Fawkes mask and cloak, who destroys the Old Bailey, assassinates several leading party members, and in the process rescues and recruits a young girl called Evey Hammond (Natalie Portman). Galvanising a cowed populace, V issues a general call to arms on the 5th of November, rightly believing that people shouldn’t be afraid of their governments, but that governments should be afraid of their people.

Comic book creative genius (and I don’t use the word lightly) Alan Moore has been badly served by previous film adaptations of his work, with From Hell ditching the complexities of his ideas and The League of Extraordinary Gentlemen completely missing the satirical, post-modern point of his original stories. It’s got to the stage where, on sitting through the credits for this latest adaptation, the viewer is informed that it is based on the book ‘illustrated by David Lloyd’ – Moore has gone so far to have his name removed. Which is a shame, as V For Vendetta is the most faithful adaptation yet of one of Moore’s earliest and most politically charged comics. In fact, what flaws there are in this film are probably due to an over-reverent approach to the source material.

On the page, the V who quotes Shakespeare and Blake is an incredibly flamboyant character, but what works on the page of a comic book doesn’t necessarily work on screen. Weaving’s V is introduced too perfunctorily and is occasionally far too melodramatic, although it is to director James McTeigue’s credit that he never succumbs to the temptation to humanise the character and reveal his face; if he had done that, the whole edifice of the story would have collapsed. Also, the film misses a sense of the depressing reality of what it must be like to live in a grim future society, and to suffer under a tyrannical government. The interiors of homes, pubs and police stations are far too clean and comfortable, whereas they should seem austere and seedy. Natalie Portman adopts a mostly successful English accent, and while her performance lacks depth on the whole, she excels in the deceptive sequence that shows Evey being tortured and humiliated. For a Jewish actress, born in Israel, I would imagine it takes great courage to submit to having your head shaved and to be bullied and broken by a jack-booted guard.

Despite these flaws, and an occasional lapse in pace from McTeigue and the Wachowski brothers’ script, V For Vendetta remains an immensely intriguing film, with little of the Matrix-style spectacle the multiplex crowd might be expecting. Instead, dressed in the guise of a big-budget action movie, what we have is an extremely pertinent, relevant, and provocative attempt to question the legitimacy of violence in political protest, and to make clear that governments should only exist on the sufferance of the people.

Even more, explicit links are made between the situation presented in the film to the situation we find ourselves in today – where our political masters consider that the best approach to the threat of terrorism is to rapidly erode the civil liberties that people have fought and died for over hundreds of years. While V For Vendetta stumbles in many places, it is encouraging to see popular culture finally responding to today’s politics, and it is incredibly stirring to see the Houses of Parliament being detonated in a ball of fire and flame.