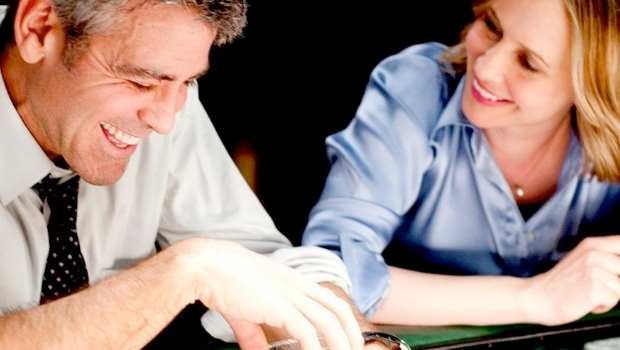 Up In The Air Review

Summary: This is a great story well told, thanks to a deft script and brilliant performances.

Up In The Air is an allegory on life, on a way of living, a way of being, and to an extent – doing things your way. George Clooney plays Ryan Bingham, a corporate exec that jet sets around the country firing staff in organisations whose lame ass bosses don’t have the back-bone to do so themselves. He has a fairly relaxed approach to it, not getting too involved, saying the bare minimum and providing all the false empathy his charming glint can muster.

Recession is in full swing and for these guys, business is booming. Firing people for them is a job, a duty, a compassionless chore, an ‘opportunity’ for the victim to take this as a wakeup call and do what great people have done in the past… Our man here also has a severe obsession with air miles, with a view to clocking up ten million and winning his own wings to an exclusive club. For those of you more devilish in thought, nope not that club.

Ryan is someone who effectively loathes commitment and avoids family like the plague, he delivers sermons on lightening your load (again, keep it clean) and having a more egoistic approach to life. Commitment, emotional attachment, anything that causes stress – it’s just not needed; like your baggage, always pack light… In his own words: “The slower we move, the faster we die.”

Ryan meets a kindred spirit in Alex (Farmiga), another business traveller as well versed as him in the finer nuances of elite privileges, business travel and executive lounges. She’s sexy, sensual and above all intriguing. “I’m you with a vagina” she calmly assays to Ryan, with both him and the audience wanting to know what lies beneath. But he gets his own wakeup call when he takes on new recruit Natalie (Kendrick) he’s forced to sit up and examine his lifestyle, as her own juvenile questions, ideas and actions bring out a side of him never before realised, never quite understood.

Based on Walter Kirn’s novel about a compulsive air traveller, son of Ivan the legend (Ghostbusters, National Lampoon’s Animal House) Reitman wrings all the humour he can out of what is on closer inspection, quite a dark premise. It’s a brilliant follow up and more accessible than the more wry Thank You For Smoking and sardonic Juno. Reitman brilliantly balances comedy with real issues, hell they even used real people from St Louis and Detroit that had been laid off for the stark firing scenes.

This is a great story well told, thanks to a deft script and brilliant performances. Clooney is fabulously sharp and later shows a more penetrable side, Farmiga is well-defined and Kendrick, well when she slowly breaks down you chuckle for all the right reasons. This is very funny, enjoyable and by the time the conclusion swings around – very human. What makes us strive for certain goals? What drives us and our passions? Is the conventional route always the one worth pursuing?

Just like Clooney’s character you can look at that bustling destination board and imagine the endless possibilities; look beyond the clouds and constellations, your eyes glistening in anticipation… Your conclusion may be as ambiguous as this one, but as is often said – it’s the journey that counts.