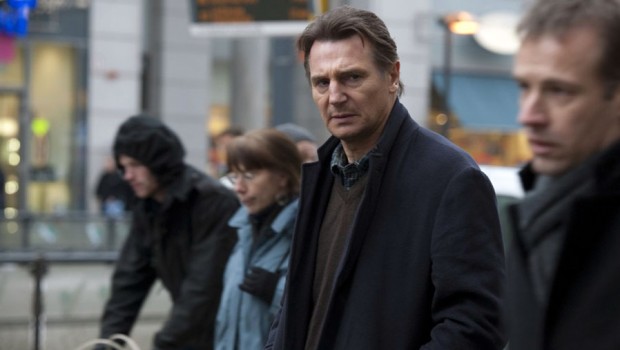 Summary: The conspiracy is convincingly bonkers, the solution ingenious – Unknown is daft but enjoyable.

Liam Neeson makes some funny choices as an actor, and Unknown falls into the same category as Taken, a thriller in which Neeson, playing American, blows up Paris in an attempt to get back his kidnapped daughter. In its presentation of a corrupt old world, chock full of white slavers, it was worthy of an Edwardian penny dreadful. Unknown appears to be very much in the same mould, with Neeson’s Dr Martin Harris, again an American, travelling to Berlin with his wife Liz (Jones) for a biotechnology conference. Arriving at the (much name checked) Hotel Adlon, he realises that he has left a case at the airport, and jumps in a cab driven by Gina (Kruger) to go back and collect it, attempting to call Liz but unable to get a signal.

Four days later, he wakes from a coma.

Gradually he begins to piece together events, but with no ID struggles to prove who he is, and is desperate to contact his wife. Returning to the hotel against the advice of his doctor, he is first puzzled, then horrified, when Liz fails to recognise him. When he explains that he is her husband, Dr Martin Harris, she introduces him to her husband, Dr Martin Harris (Quinn). Harris is thrown out of the hotel and returns to the hospital, where he is scheduled for more tests. But when an assassin murders his nurse and attempts to kill him, he flees the hospital hoping to find Gina and to prove, with the help of a former Stasi officer, to prove that his identity has been stolen.

Unknown, it has to be said, is completely ridiculous. It begins as a taut thriller in the mould of Polanski’s Frantic and ends in utterly over the top style with the usual car chases and explosions, having lots of fun along the way. It gives away, fairly early on, that there is something fishy about Dr Harris, but the final twist is still clever enough to keep you guessing. Neeson turns in his usual solid performance, Mad Mens’s January Jones isn’t required to do much more than look gorgeous, while Diane Kruger is believable as the illegal immigrant Gina, who just wants to stay out of trouble till she can save enough to pay for her papers. Aidan Quinn, Frank Langella and Bruno Ganz all lend solid support.

Shot on location in a gloomy Berlin, the film has a nicely European sensibility and there is a certain sly humour in making Harris’ only supporter a former East German secret policeman. The conspiracy is convincingly bonkers, the solution ingenious – Unknown is daft but enjoyable.