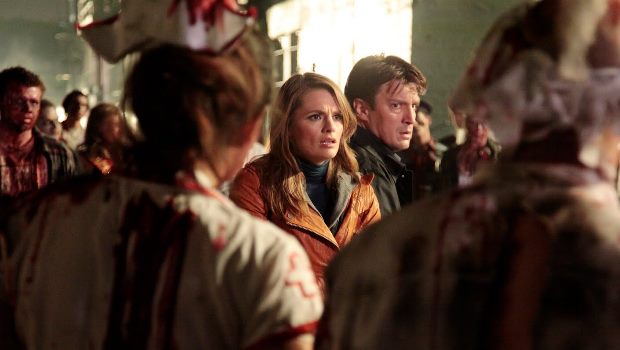 Summary: This is a silly slapstick horror which can be viewed as stupid fun.

Pitting zombies against cowboys in the Wild West is a novel setting for a horror movie, particularly when combined with slapstick humour and a comic double act. The resultant hybrid, Undead or Alive, is labelled a “zomedy” by its makers, including a former South Park writer/director, and is a genre we aren’t likely to see again, though there is some fun to be had with this original idea.

Undead or Alive sees Elmer Winslow (Denton) on the run from the Union Army as the soldier, a dab hand with a gun, prefers to go it alone than fight for someone else. His favoured adventuring as a lone rider is stopped in its tracks when he runs into cowboy and broken hearted dimwit Luke Budd (Kattan), in a small town. After landing themselves in jail they escape to freedom unaware a plague of zombies is sweeping through the country. In the desert they find Apache warrior Sue (Rawat) who is looking for revenge after here people were killed, and team up to survive until an old curse threatens to put them against each other.

The teaming up of James Denton, probably best known for his role in Desperate Housewives, and Saturday Night Live’s Chris Kattan provides a comic double act which just about carries this none-too-serious movie. Denton’s deadpan gunslinger is the fire to Kattan’s ice, though Denton is given the superior role to play even if it generally requires him to put down Kattan’s attempts to inject some lively humour – not too hard a task when Kattan is working with throwaway goofy one-liners. Rawat seems to be enjoying herself the most as a feisty Apache warriror, though they all take a back seat whenever the zombies appear. Then it becomes an action packed splatterfest which is the real reason you might want to see Undead or Alive. If you want to see a load of zombies get slashed up and shot in the head, you’ve come to the right place, though if you are a hardcore zombie fan you won’t appreciate the comic elements so much, and vice versa.

Coming from a former director of South Park episodes (albeit for just one season), you might expect Glasgow Philips to adopt a more adventurous or offensive style than seen here. Undead or Alive has the iconography of Westerns with the cowboys, Apaches, dusty towns and sparse deserts while throwing in the blood and guts of slapstick horror such as Evil Dead 2, which is a feat in itself, yet there is a sense he’s not trying too hard to leave a lasting impression. Undead or Alive rides by neither as a memorable melding of two genres, nor as a simultaneous pastiche of both. This is a silly slapstick horror which can be viewed as stupid fun, yet at the same time is all too easy to ignore.