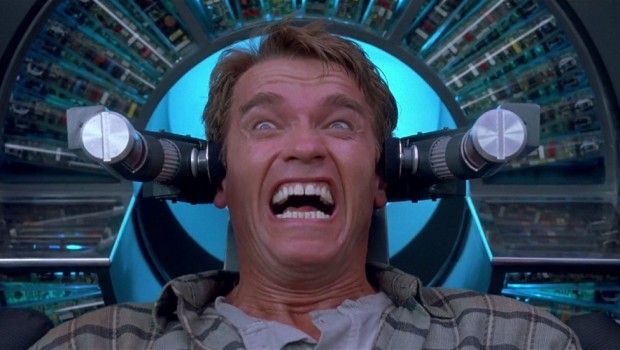 While Colin Farrell and Len Wiseman sweat over how their version of Philip K. Dick’s sci-fi short story “We Can Remember It For You Wholesale” will fare at this summer’s box office, Verhoeven’s humourous action romp spread across Earth and Mars has been restored and extended for a new DVD and Blu-ray release. Still as innovative as on initial release 22 years ago, the remastered sight of Arnie and Sharon Stone going toe-to-toe along with a myriad of mutants, futuristic gadgetry and a twisting plot make for an entertaining ride that Farrell and Wiseman will struggle to better.

Set in 2084, Schwarzenegger is Douglas Quaid, a construction worker with beautiful wife Lori (Stone) and seemingly set for life – except he hankers for a trip to Mars. Rather than risk visiting the colonized red planet wracked by political unrest he decides to go on a virtual vacation thanks to conglomerate Rekall. They offer to implant memories into people’s minds which seem like the real experience, and even provide the option to assume a different identity. Quaid opts to be a secret agent but during the implant events go awry and he finds himself on the run with only a video recording of himself as a clue to why his life is at risk. As his wife and friends turn against him en route to Mars he starts to question whether he’s mistaken the implant for reality, or if there’s a more sinister reason for his life being at risk.

Although Schwarzenegger has never been the greatest actor, Total Recall’s hyper-reality of a future world has a comicbook feel enabling the action star to flex his humorous muscle. His mix of one-liners, agonised expressions as he tries to figure out what’s going on and general demolition of all obstacles in his way are classic Arnie and ensure you’re rooting for Quaid as he takes us on a tour of this imaginative setting. Many of the visual effects and ideas were the first time they’d been used on Total Recall giving a roughness to the look and feel of the film which adds to the pulpy flavour. The Verhoeven themes of rule by global corporations and authoritarian futures ensures there’s a social commentary bite to the carnage too.

Though Total Recall doesn’t take itself too seriously, sci-fi and action fans are well served with additions such as the robot Johnnycabs, three-breasted women and an inventive disguise donned by Quaid which add to the visually complex style. The supporting cast, in particular Stone, commit fully to many of the outlandish ideas which seem to come thick and fast the moment Quaid sets foot on Mars. It’s difficult to imagine that Wiseman will ever match Verhoeven’s visionary movie.

EXTRAS
The DVD versions includes a new interview with Verhoeven, special effects insights, commentary with Verhoeven and Schwarzenegger and trailer. The Blu-ray has a restoration comparison, photo gallery and additional features.