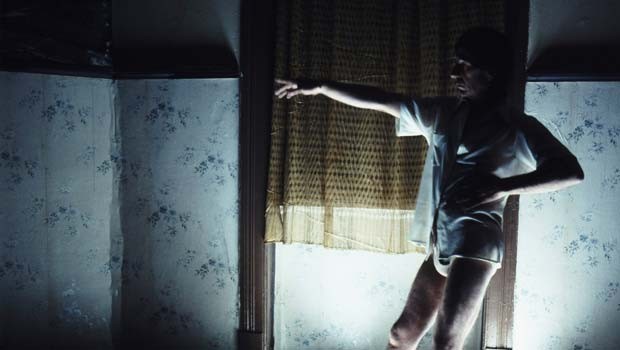 Summary: Bravura performance from Alfredo Castro, who looks like a down-on-his-luck Al Pacino.

If you were expecting a cheery disco film about a John Travolta impersonator, you might be in for a shock; Tony Manero is much more rewarding, if also a lot darker and more depressing.

Set in Chile in 1978, Tony Manero is the story of Raul Perata (Castro), a fifty-something loser whose only, indeed obsessive, interest is in impersonating John Travolta’s character in Saturday Night Fever. Raul leads a small group of dancers who perform in a bar on the outskirts of the city; all week they rehearse and on Saturdays he gets to live the dream, at least for a little while. He has all the details down, he watches the film almost every day, meaninglessly parroting the dialogue and noting how many buttons Travolta has on his suit jacket. He arranges the purchase of glass bricks to replace part of the wooden stage (which he deliberately smashes), emulating the lit-up squares on the floor of the films New York night club. Strangely, all the other dancers seem to love him, though he is washed up and impotent.

And then everything changes.

The national television station announces a competition; they are looking for the best Tony Manero impersonator. Raul’s obsession, previously manageable, blossoms into something monstrous. He will stop at nothing to win the competition; so focussed is he that he doesn’t even realise that the rest of the dance troupe are part of an underground movement against Pinochet’s government, and are being persecuted by the secret police.

I have to say this is a very strange film. The protagonist is a dead-eyed, amoral criminal who progresses from petty theft and vandalism to murder in the blink of an eye; the story is in many ways slight and self-indulgent and peculiar; the lives of the characters are miserable; dance, which is normally an expression of joy or at least some sort of emotion, is here really disturbing. And yet… it’s worryingly enjoyable; at once chilling and funny. Early on in the film Raul helps an old lady with her shopping only to beat her to death for her colour television. It’s the scale of his crimes in proportion to the paucity of his ambition that accounts for the black humour of the film; the winner of the Tony Manero lookalike contest will go home with a liquidiser, but that’s irrelevant; it’s the recognition that counts for Raul.

Pleasingly, we never find out why Raul is like this; he just is. He is dancing while around him people are being shot and persecuted by a morally bankrupt regime; his behaviour a metaphor for the state of the nation. Everyone is so busy looking out for themselves that Raul commits his crimes with impunity, ruthlessly eliminating anyone who he perceives as a threat. One day he turns up at the cinema to find that Saturday Night Fever’s run has finally ended, and Grease is on instead; you can imagine how he reacts…

Sometimes the metaphor is a bit literal, but the down and dirty story is replicated in the down and dirty filmmaking style, the handheld camera following Raul from one crime to the next. It’s helped by a bravura performance from Alfredo Castro, who looks like a down-on-his-luck Al Pacino.