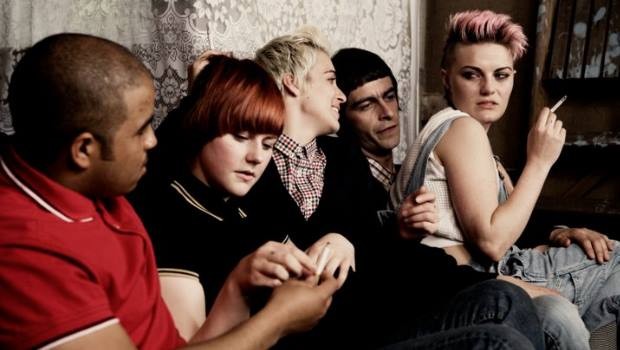 This is England ‘86 Review

Summary: It's not for the faint-hearted, but This Is England 86 makes for compelling viewing.

Rather than make a sequel to his most acclaimed move, Shane Meadows elected to add a four part mini-series to conclude the story started in This Is England, an uncompromising look at the gritty side of life growing up in 1983. Back in 2006 when the film was released, themes of high unemployment and racial hatred were less hot topics than since where the credit crunch has become a global recession and the BNP managed to gain more media interest. And so Meadows takes us back to small town Britain in 1986 -post skinhead posturing but in the midst of England’s involvement in the World Cup and a showdown with Argentina which will dredge up the still-raw memories of the Falklands. In this increasingly heated atmosphere Shaun (Turgoose) is about to sit his last exam at school that will be the calm before a stormy few weeks as he enters adulthood.

Bringing together all the original cast for this series was vital for it to be a success – Shane Meadows has an knack for getting the best from actors in the most stripped-bare of situations and This Is England saw impressive results. Here they all slot right back into their original characters enabling the series to get off to a fine start. The first two episodes display a classic trait of Meadows: lure us into a false sense of security. There’s an upbeat tone with none of the menace seen in the climatic scenes of This is England. Shaun finishes school to start thinking about his future while his friends Lol, Milky, Woody and Smell are all suffering from disappointments in love, work and life in general. Into this mix of youth struggling for direction comes a few shocking truths that will pushes their emotions to their extremes.

Meadows again uses the innocent looking Shaun as the focal point for the action of This is England 86, his experiences with Smell show a touching innocence even when Shaun’s mother walks in on them enjoying each other on the sofa. Meanwhile Lol, Milky and Woody are entwined in a love triangle that isn’t doing them any favours. However, it is the reappearance of gang leader Combo (Graham) that stirs up the real trouble and wounds of the past while Lol’s dad Mick (Harris) shows he has rapist urges which make for the harshest viewing – though regular viewers of Meadows’ films will be expecting a nasty sting in the tale, especially after a brighter start.

Although Meadows again uses shocking scenes to imbue his work with an uncompromising streak, This is England 86 is another example of how he does it so expertly and ensures it’s not done just to gain attention. The situations we see here can well be imagined to have stemmed from the experiences he had growing up in Nottingham where he dropped out of school as a teenager. His characters are flawed but doing the best they can to make up for any failings – and while they don’t always get it right, their actions are always built on the characters themselves rather than any need for narrative goals. The series gives Meadows a chance to add depth to his characters and as a snapshot of life in the 1980s, it’s telling how the clothes and furnishings may be very different to now but the attitudes, social problems and World Cup excitement is eerily similar. It’s not for the faint-hearted, but This Is England 86 makes for compelling viewing.