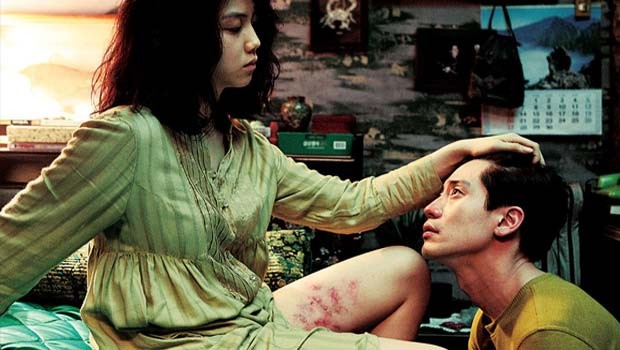 Summary: Thirst once again shows Chan-wook’s ability to deliver visceral shocks from extreme situations yet somehow place them in a framework which seems perfectly acceptable in the context provided.

Park Chan-wook’s themes of family, guilt and obsession come together in a marvellous spurt of vampirism in Thirst. Loosely based on Emile Zola’s novel “Therese Raquin”, Thirst sees Chan-wook explore desire and hatred in a traditional Western genre given an Eastern twist as it delves into the dark recesses of the minds of a vampire trying to live among a normal family.

Sang-hyun (Kang-ho) is a priest who cherishes life and agrees to volunteer for a trial of a vaccine intended to cure a deadly virus. When the virus appears to be affecting the priest threatening his life, so he is given a blood transfusion to save him. However, the blood he receive is infected and while he survives the viral attack, he is left craving the blood of others as a vampire. At first Sang-hyun tries to ignore his desires and continue his faith, though it’s not long before temptation enters his path. His childhood friend’s wife Tae-ju (Ok-vin) seeks his help to escape a tormented life as little more than a servant, sending him on a descent into the realms of sinful pleasures and soul-shattering crime.

Chan-wook delights in telling pitch black stories littered with comedy and Thirst is another treat. Sang-hyun is one of his classic anti-heroes acting out his desires which become darker and more life-threatening as the film progresses. Initially you’re drawn to his weakness as a result of his own self-sacrifice to test the virus yet becoming a vampire, soon you find yourself feeling sorry for him despite the horrors he is inflicting on others. Likewise with Tae-ju it seems she is finding a way out of a desperate home situation by pairing up with Sang-hyun, the souring of that relationship provokes an unenviable psychological effect on the pair.

The vampiric element of Thirst is very much left in the background to enable Chan-wook to save the blood-letting until the latter part of the movie. This helps add depth to the story and avoids any reliance on the violence so often used in Hollywood vampire movies. When it does come, it is a sinister take on how needing blood to survive isn’t just about biting the neck of strangers in the dark – it can lead to far more damaging needs, especially when family members are involved.

An original and provocative piece of Asian cinema, Thirst once again shows Chan-wook’s ability to deliver visceral shocks from extreme situations yet somehow place them in a framework which seems perfectly acceptable in the context provided. While it doesn’t push as many boundaries as his Vengence trilogy, anyone who has enjoyed his films before will find Thirst another treat.