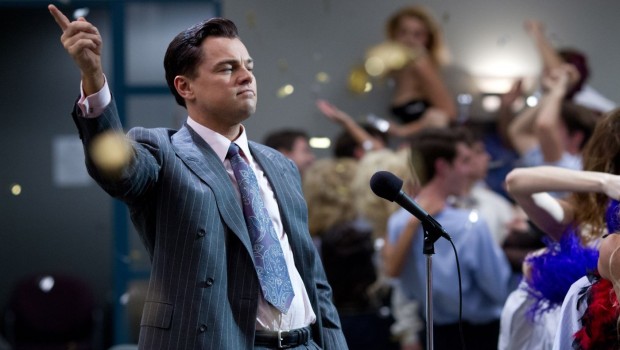 The Wolf of Wall Street Review

Summary: Scorsese and DiCaprio team up again for a rip-roaring ride through Wall St with sex, drugs and 90's excess

Scorsese is an icon in every sense, with most of his movies gaining gargantuan plaudits and cult status pretty much on release. The auteur that graced us with gems including Taxi Driver, Raging Bull, Goodfellas, and more recently Gangs of New York, Hugo and The Departed is textbook reference for larger than life characters, frenetic story-telling and emotional catharsis, more often than not framed by a dizzying white knuckle ride. This outing is no exception.

The Wolf of Wall Street is the true story of conman trader Jordan Belfort (DiCaprio), a savvy young Jewish broker from New York looking to make his way in Wall Street by any means necessary. He starts off at J F Rothstein and is quickly taken under the wing of quirky and charismatic lead broker Mark Hanna (McConaughey) Belfort’s very own Gordon Gekko. Hanna teaches him how to make money without integrity or conscience, but by using two tools at his disposal: cocaine and spanking the monkey…

Belfort’s first day as a qualified Broker is the infamous Black Monday, and he soon finds himself trading penny stocks in a suburban shopping mall. On finding this to be über-lucrative, he sets up his own operation in a dis-used garage with local acquaintances and his incestuous neighbour Donny (Hill). As sales grow exponentially and his company take a step towards legitimacy, the train inadvertently starts going off the rails… Belfort’s company: ‘Stratton Oakmont’ is essentially an elaborate boiler room scheme (which in reality processed close to $1 billion in stock issues) propagating crude pump and dump scams, and conning thousands of unwitting investors out of their cash.

This is yet another biopic from Scorsese and DiCaprio as only they know how. With extreme scenarios and situations you simply can’t make up, they excel in telling a story that is every bit as entertaining as it is a lesson in excess. This isn’t for the faint-hearted, and is definitely more Casino than Raging Bull. It’s based on Belfort’s own incredulous memoirs, much of which has been verified as true. Indeed there are still many videos from Belfort and his lifestyle in the 90’s available online.

DiCaprio is charismatic and fabulous as always, with surprise turns from Hill (hilarious), Robbie (playful) and McConaughey (doolally). It’s also nice to see Joanna Lumley in a well-played cameo, although she does seem somewhat misplaced in a Scorsese movie. This is a fantastic exploration of greed, money, and a truly flawed character that spent much of the nineties on a jaw-dropping but pernicious thrill-ride. Well worth a watch, especially if you like your entertainment larger than life.