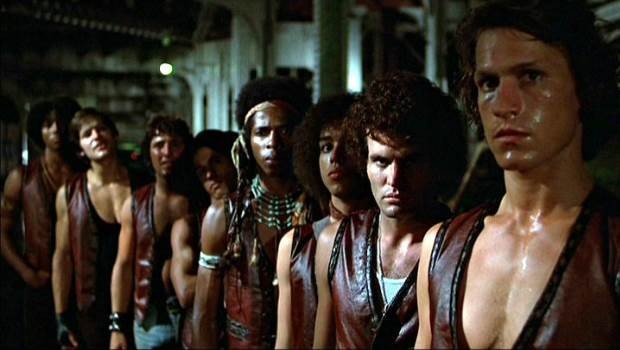 Summary: If you like your movies with a bit more of a punch than usual, watch The Warriors.

One of the greatest pleasures in the world for anyone who considers themselves a film fan, is to suddenly discover a film that they have never heard of before, and to fall head-over-heels in love with it.

This is what happened to me one night several years ago, when I came across a film that caught my attention. In it, a bunch of guys in leather jackets and long hair were walking through the streets of an American city at night, displaying pretty poor acting and spouting fairly corny dialogue. I was about to switch over when, all of a sudden, some other guys appeared dressed in old-style baseball outfits, swinging bats and boasting the kind of face make-up that would have made Gene Simmons jealous. What followed was one of the most exciting chase and fight sequences I had ever witnessed. I was hooked. And although I didn’t know it at the time, I was watching what I now believe to be one of the finest action films ever made. I was watching The Warriors.

And now you can too, with the release of this Director’s Cut DVD. And you should, because it is an utterly brilliant film.

The narrative of The Warriors is simplicity itself. It follows the fortunes of a Coney Island street gang, who travel deep into New York one night to join a meeting of all the gangs of the city, called by Cyrus, the leader of the biggest gang, the Riffs. In the middle of his rousing speech, which sees him theatrically urging all the gangs to join together to take over the city, he is shot by the slightly unhinged leader of a rival gang. The Warriors are blamed for the shooting but manage to escape. Alone and deep in hostile territory, The Warriors realise they have to (and I quote) ‘bop their way back to Coney’.

In doing so they find themselves facing a number of different and increasingly more formidable gangs (including the previously mentioned ‘Baseball Furies’). On the way they pick up a broad, get split up, suffer a variety of ignominious fates, and have a pretty rough time of it generally. (By the way, if the narrative of the film sounds to you a little like a video game, you might not be surprised to learn that Rockstar Games are soon to release a Warriors title).

There is much to love about The Warriors. For starters, its cast comprises of a mix of endearingly poor actors, many of whom seemed to have simply dropped off the radar, as well as a couple of individuals who have gone on to enjoy a certain level of success. James Remar, who plays Ajax, is one of the film’s most enjoyable characters – a veritable hard-man with a screw-you attitude who kicks some serious ass but who also, due to a slightly backwards view of sexual politics, makes a surprisingly early exit. But perhaps the stand-out performance in the film doesn’t actually come from a Warrior, but from the guy who frames them. David Patrick Kelly as Luther – imagine a non-Jewish Ben Stiller whose pumped-up little guy rage comes out in the most twisted of ways – is brilliant as the leader of The Rogues, a gang who dress up as leather queens and whose deputy leader looks a lot like Martin from EastEnders. In fact, Kelly was personally responsible for one of the most celebrated moments of the film, when he taunts the Warriors by putting his fingers into little beer bottles, clicking them together and wailing, ‘Warriors, come out to pla-ay’.

The style of the film is also fantastic. Hill worked closely with his costume designer Bobbie Mannix to produce some of the coolest looking gangs ever committed to celluloid. The majority of the film was shot at night in New York city, and the streets filmed on were wetted down so as to reflect the neon lights of downtown New York. The films is edited in a way that helps to relentlessly drive the story along, so there is a constant feel of movement – so much so that when the action does occasionally slow down, you are itching for it to get cranked back up again. This relentless pace is aided by the film’s score by Barry De Vorzon, who mixes together rock and electronica to produce an exciting soundtrack to the action on the screen. And the script, although now sounding somewhat dated, has a nice element of comedy running through it, which acts as a counter-balance to the bouts of violence on the screen.

However, it is this violence that really makes The Warriors the classic that it is. On a relatively tight budget, with no such thing as CGI and hardly any stunt doubles, Hill manages to produce some of the coolest fight scenes in film history. Beginning with their run in with the Baseball Furies, continuing with a no-hold-barred encounter with a female gang The Lizzies (there’s no sexual discrimination when it comes to ‘bopping’) and ending with a showdown in a men’s public toilet against a gang of lads who dress up like Rod, Jane and Freddy, Hill’s fight scenes are brutal affairs – exciting, violent and although not exactly realistic (no blood flies or bones crunch) they have a very evident level of physicality. In short, they rock.

And although perhaps a little naïve, it is nice to see that in the world of The Warriors, it is your gang and turf that you are affiliated to, not your creed and colour. It might not happen in the real world, but in The Warriors, black and white fight together in a common cause like it’s the most natural thing in the world.

It might not be the most well-acted film in the world, it’s dialogue is often a little ropey and it can look pretty dated at times, but this only helps to make The Warriors an even more enjoyable film to behold. If you haven’t seen this gem of a movie before, then sort yourself out and buy this DVD. If you like your movies with a bit more of a punch than usual, watch The Warriors.

Can you dig it?

The special features in this DVD are, like the film itself, basic but effective. They pretty much just comprise an excellent documentary on the film, including interviews with all of the film’s principal players, both in terms of cast and crew. It’s a fascinating insight into the production of this classic, and containS a lot of interesting information (such as the Greek history that inspired the story). But if you’ve never The Warrios before, make sure you watch the movie itself before the documentary.