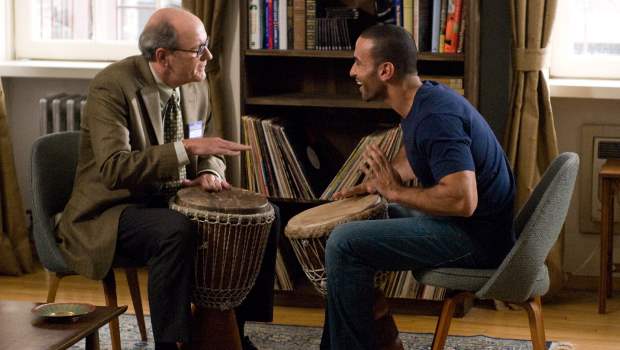 Summary: It is very perceptive and joyful, full of flowers and music and colour and the richness of life in New York, while raising interesting questions about US immigration policy in today’s world.

There have been a tonne of films made about the experiences of immigrants but few as beautifully told and poignant, I think, as The Visitor, Thomas McCarthy’s follow up to his critical ly acclaimed debut The Station Agent.

Walter (Jenkins), a widowed academic, lives an aimless, disjointed life. Since his wife’s death, the joy has gone out of him and he has lost his way and his passion for life. When he reluctantly agrees to fill in for a colleague at a conference in New York, he is surprised to find a young couple, Zainab (Gurira) and Tarek (Sleiman), illegally subletting his apartment, and asks them to leave. But as he watches them argue in the street, some compassionate impulse takes over and he offeres them a room for as long as they need one. Tarek is pleased and grateful, Zainab more suspicious, but they move in and Richard discovers that Tarek is a djembe drummer in a jazz band. Richard, not musical himself, is drawn to the drums and Tarek begins to teach him.

And so a strange friendship between a young Syrian, an illegal immigrant jazz player, and a WASP economics professor begins. Richard plays the drums with Tarek in Central Park and goes to see his band perform in the clubs. Tarek is very winning, a pure spirit; he wants to make music, live with Zainab, and be happy, and Walter and he quickly find common ground, while Zainab is more prickly and suspicious.

And then one day, on the subway, Tarek is stopped by the police, and suddenly finds himself in detention. Walter is the only person who can visit him; everyone else is on American soil illegally. When Tarek misses his weekly call to his mother, Mouna (Abbass), she arrives in the city looking for her son. Walter does his best to help, but time is running out for Tarek, and Walter soon realises just what he is up against: stubborn, jobsworth immigration officers and blind bureaucracy.

I knew nothing about The Visitor and was uninspired by the short synopsis, so the film was an absolute treat. It’s a perfect antidote to all the mindless summer blockbusters, fun though they can be, a film for grown ups.

I loved the way the film subverted my expectations. Walter is not a curmudgeonly misanthrope. He loved his wife, a classical singer; since her death he has simply lost his way and his ability to connect. Tarek, despite his circumstances, is the most positive and sunny person, and when Walter stumbles across him, he is suddenly swept up on this amazing and completely unexpected voyage of discovery. Zainab, having been in detention, understands the system better than Tarek, and is much more cynical and hard as a result.

It’s the little moments in the film that have the most profound consequences and it feels very real as a result. In the end all the characters are more alike than they are different and their shared humanity shines through. Despite dealing with harsh subjects, the film is full of humour, mocking the casual ignorance of the tourists buying Zainab’s jewellery and Walter’s first fumbling attempts to play the drums. It is very perceptive and joyful, full of flowers and music and colour and the richness of life in New York, while raising interesting questions about US immigration policy in today’s world.

Related:
Richard Jenkins and Tom McCarthy talk about The Visitor