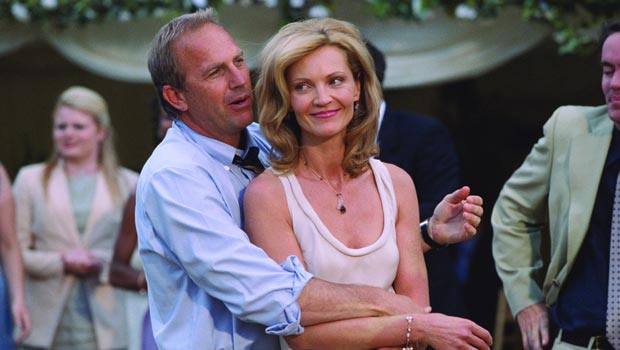 The Upside of Anger Review

Summary: Sharp lines and amusingly offbeat situations making the most of the leads.

Not normally a fan of former Hollywood superstar Kevin Costner or romantic comedies, The Upside of Anger had me wondering whether I could make it through two hours of both combined. Then in stepped Joan Allen, taking centre stage as a middle-aged mother-of-four stunned when her husband apparently elopes to Sweden with his secretary. Allen’s performance as the angry and heartbroken Terry Ann Wolfmeyer won me over immediately, and acts as the perfect foil for Costner’s lonely former professional baseball player Denny Davies she turns to for support. Their alcohol-induced friendship and growing reliance on each other sets up a smart comedy that brings out the best of Costner’s rarely seen funny side and entertains from start to almost finish.

Terry, previously a content and sweet-tempered housewife, is soured by her husband’s disappearance: she becomes angry and weighed down by her daughters’ choices. Eldest Hadley (Witt) surprises Terry with a pregnancy and intentions to marry the father, a fellow university graduate. At home, Emily (Russell) is pursuing a dancing career against her mother’s wishes while Andy (Christensen) is taken on as an assistant at Denny’s radio station and quickly starts a relationship with his slimy boss Shep (writer/director Binder). With youngest daughter “Popeye” struggling with identity issues, Terry’s stresses are only made bearable by a flow of alcohol – and the appearance of Denny knocking on her door.

Allen is perfectly cast as the sharp-witted Terry who isn’t afraid to do or say exactly what she feels like to anyone. Confronted with Hadley’s pregnancy and meeting her boyfriend’s parents for the first time, she orders a Bloody Mary and immediately attempts to sabotage what is supposed to be a celebratory engagement dinner. She is not a mum to cross: her cutting remarks make her targets squirm but are hilarious for us watching. Add to this the most evil of glares which has a literally explosive effect when Andy invites Shep to dinner, and you might think her husband’s disappearance had left her with a heart of stone.

However, through her tentative relationship with Denny, a fragile and personal side emerges. There is a sweet innocence about their romantic dabbling, almost as if they were teenagers learning the dating ways, yet it is also coarse at times to avoid the obvious honey-soaked niceties of standard rom coms. Costner’s swagger as the former baseball star relying on self-signed balls and a talkshow he has banned any questions about baseball from is casual but well played. Anyone who thought he lacked humour and could only perform well as straight-laced characters such as those in JFK, 13 Days and Open Range will be pleasantly surprised by his comic interplay with Allen – it’s almost impossible to keep a straight face when they are onscreen together.

With sharp lines and amusingly offbeat situations making the most of the leads, Binder disappoints when an eye-rolling twist pushes The Upside of Anger into the realm of toe-cringing sentimentality and then a final gut-wrenching voiceover explains the title. Even so, the interaction between Allen and Costner is a classic double act that easily outweighs such an unsatisfactory conclusion.