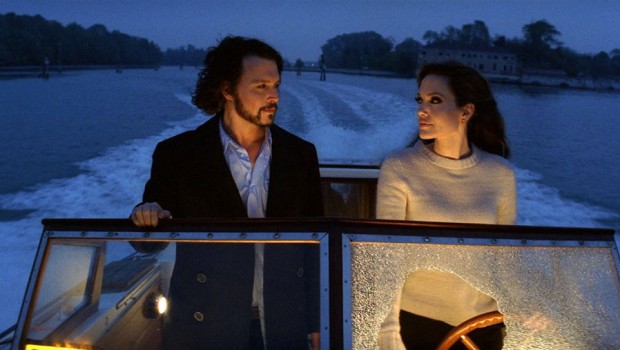 They don’t make ’em like they used to, but that never stops them trying; The Tourist has a definite whiff of sixties-style Hitchcockian romance/crime caper, right down to the glamorous European setting and nods to Audrey Hepburn in Angelina Jolie’s costumes. And certainly Venice has rarely looked more beautiful, though surely the Doge’s Suite at the Danieli has more than one bedroom?

Jolie plays Elise Ward, girlfriend of master criminal Alexander Pearce, who is wanted by Scotland Yard for tax evasion, and by the gangster boss he stole millions from. Pearce disappeared underground two years ago, amid rumours of facial reonstruction; with the Paris-based Elise their only lead, a team from Scotland Yard led by Paul Bettany’s Acheson, helped by the French gendarmerie, keep a close eye on her, though her routine never varies, until one day… Catching a train to Venice, Elise meets Frank (Depp), a school teacher from Wisconsin holidaying in Europe. Unable to believe his luck, Frank doesn’t realise that he is being set up – Elise wants the police to believe that Frank is Pearce, so they will stop following her.

Of course things don’t go exactly according to plan; having set Frank up, Elise feels guilty when she realises that he is likely to be killed by (Berkoff), and goes back to rescue him, while Frank finds himself falling for the totally unsuitable Elise, notwithstanding the fact that she is in love with another man, albeit one that she hasn’t seen for two years. Despite her telling him to leave Venice, Frank decides to take a chance.

On paper, The Tourist sounds like a dream film – two of the hottest actors alive, in a charmingly frothy romantic crime caper set in one of the most beautiful cities on earth. So why didn’t it come alive on screen? Perhaps it is the almost calculatedly formulaic nature of that dream film… it feels just a bit too careful, it lacks any real joy or zaniness. Perhaps director Florian Henkel von Donnersmarck, so highly praised for The Lives Of Others, just lacked that lightness of touch needed for this kind of film. Or maybe it’s just that we don’t quite believe in this glamorous other world in the age of budget airlines, though it was lovely that Depp and Jolie’s characters met on a train – you can’t imagine striking up a conversation with a stranger in a coffee bar at Charles de Gaulle airport in quite the same way.

It doesn’t help that neither Jolie or Depp are looking their best. Jolie channels Hepburn, but is painfully thin, so much so that the film actually looks stretched; her clothes are exquisite, but she herself is not. Depp is saddled with a dreadful hairstyle and is oddly puffy round the face, and the much vaunted chemistry is not much in evidence. The supporting cast, largely British, do their best in fairly thankless roles; Paul Bettany rushes around while Timothy Dalton, Rufus Sewell and Stephen Berkoff phone theirs in. There are a few funny moments early on, where Frank nervously speaks Spanish when he should be speaking Italian, but the humour is soon abandoned, more’s the pity.