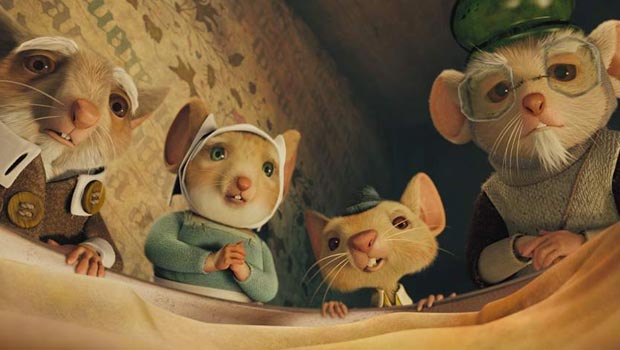 The Tale of Despereaux Review

Summary: It has a lovely, literary feeling, but its strengths are also its weaknesses. The backstory drags, and younger children may find it confusing.

Despereaux Tilling (Broderick) is a highly unusual mouse. Tiny, with enormous ears, he is the bane of his parents’ existence. He doesn’t behave like a mouse. He doesn’t scurry, he isn’t timid; and when his brother takes him to the castle library to eat paper, he starts reading the books instead. Despereaux is a romantic, full of tales of courtly love and knightly derring-do, he longs to save a damsel in distress, and sets his heart on the princess, Pea (Watson).

Pea does need help. Her father’s kingdom is not a happy place; once joyous and famed through the world for its soup, when an accident broke the king’s heart, soup and rats were banned and sunlight disappeared. All hope seemed lost. Pea longed to escape the doldrums that had settled over her grey and lifeless world, but for speaking to a human Desperaux is banished, sent to live in Ratworld in the castle dungeons, a place where light never penetrated, ruled over by a cruel despot, Botticelli (Hinds). Desperaux only escapes with his life thanks to the kindness of a rat called Roscuro (Hoffman). Roscuro isn’t like other rats, but has a bitter secret of his own…

The Tale of Despereaux, based on Kate DiCamillo’s Newbery winning fable, sticks closely to the source material in both look and story. The animation is old-fashioned, with a light, watercolour wash that suits the story’s themes right down to the ground. The voice actors are uniformly good, with Sigourney Weaver’s narrator standing out. DiCamillo obviously has an issue with parents: Despereaux’s are pretty useless, and see him banished with barely a qualm, while the king sulks, playing the lute in the throne room, failing miserably in his duty or to see that he is destroying his whole country. And then there’s Gregory (Coltrane), the jailer, who long ago abandoned his baby daughter and refuses to discuss his past. The older generation having failed them, it’s up to the kids to save the country and bring light, life, and soup back to Dor. This message of courage and pluckiness in the face of adversity will sit well with children, if they can get over the other.

It has a lovely, literary feeling, but its strengths are also its weaknesses. The backstory drags, and younger children may find it confusing. But more importantly, it’s surprisingly dark. The idea of grief and depression affecting an entire country; Despereaux’ banishment to Ratworld; the kidnapping of Pea; the sadness of Miggery Sow (Ullman), the orphaned serving girl who dreams of becoming a princess – all these elements combined may be too much for the target audience, while the multiple story strands become quite confusing if you are unfamiliar with the source material.