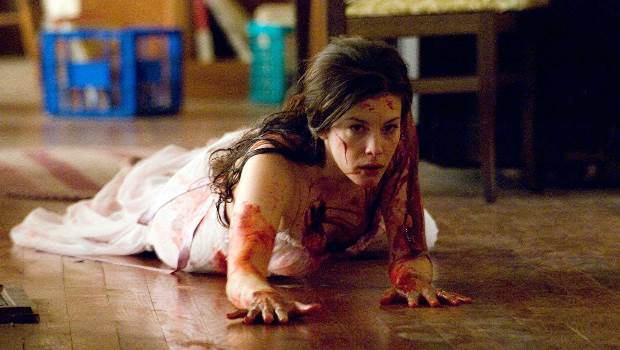 Summary: The Strangers delivers suspense and decent shocks to keep it ahead of the average Hollywood horror.

Menacing, taut horror films usually obey a key rule: isolate the victims with just enough suggestion they can get help, but lure then into nasty situations with maximum suspense. And a scary mask. The Strangers is all about these moments as a couple are terrorised in a remote getaway by an unknown trio of masked assailants in a simple but effective shocker where a home is transformed from a place of refuge into an invaded space.

When young couple Kristan McKay (Tyler) and James Hoyt (Speedman) open the door to an isolated house surrounded by woods at 4am, it is supposed to be a romantic end to the night James asked his girlfriend to marry him. Sadly the meal doesn’t go quite the way he’d planned and they face an uncomfortable discussion of the evening’s events while a double bed full of roses goes unloved. However, answering a knock at the door reveals a girl shrouded in darkness standing outside looking for someone the pair don’t know. Turning her away, knocks come again and more sinisterly before it becomes apparent Kristan and James will have to fight to survive this night in the country.

First-time writer/director Bryan Bertino gets the basics right for The Strangers. Kristan and James are perfectly innocent victims stuck in a situation they can’t hope to understand and he ramps up the tension as a knock at the door develops into masked figures lucking in the background as Bertino follows the two nervous residents slowly around the house with a handheld camera. The masks, two painted doll faces and one small white sack with burns for eye holes, provide much of the impact of these eerie early scenes: their vacant, cold stares give an inhuman look which will send a shudder down your spine. Keeping Kristan and James unaware of their presence gives a voyeuristic element to proceedings too as we see the watcher and the watched, giving the feeling we are in cahoots with invading trio. However, despite this clever camerawork and initial set up, Bertino isn’t quite as good at providing a sophisticated plot to match.

Kristan and James endure all the classic mistakes of an isolated couple in danger such as running out of mobile phone battery, leaving another in the car, abandoning each other and generally not making any of the smart decisions available to them. It doesn’t help they’re an unlikeable yuppie couple either. Yet, for all the stupidity, Bertino manages to sustain the claustrophobic nature of the house scenes with brief chases outside to cars and a shed, helped by the moonlight hitting the masks in the right places at the right times. When guns start appearing it’s clear there isn’t going to be pretty end to this movie based on true events, although the final torture scene doesn’t offer much in the way of a satisfying conclusion. Well-produced and with masks certain to become regulars at future Halloween parties, The Strangers delivers suspense and decent shocks to keep it ahead of the average Hollywood horror.