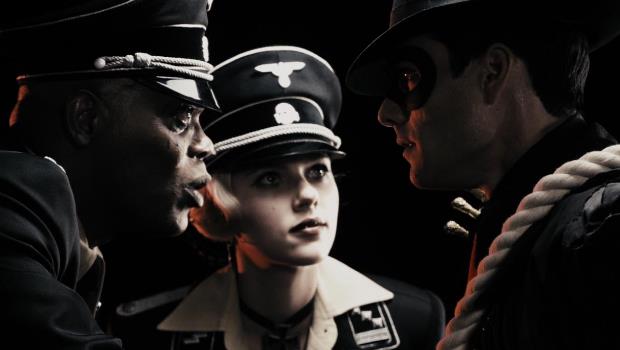 Summary: The Spirit is a complete failure for Frank Miller, mistakenly brought to life with the best intentions but ill-fitting for his vision.

Sin City creator Frank Miller steps out of the shadow of filmmaker Robert Rodriguez with a comic book movie written and directed for the screen solely by himself. Based on influential writer Will Eisner’s original character first seen in the 1940s, The Spirit sees him adopt the same cinematic style to that used for Sin City: shooting actors against a green screen and placing artificial backgrounds behind or restricting the image to black and white with hints of colour. Yet, while Miller is a proficient purveyor of the techniques needed to produce two hours of trendy visuals, his nonsensical script and disappointing direction make The Spirit unbearable to sit through.

The Spirit is a cop brought back from the dead to leap from rooftop to rooftop of an American city fighting crime wearing a costume resembling Zorro with a hat, eye mask and cloak,. Re-imagined by Miller with his nourish setting of dark and rainy streets used for Sin City, it might seem like a simple task for him to transplant the character into his own stylings effectively having made such a good effort of bringing his own creation to life when paired up with Rodriguez. Sadly this is not the case as The Spirit has gone drastically wrong – starting with the hero himself.

The titular character is played by relative unknown Gabriel Macht delivering hammy dialogue and laboured narration throughout. If he isn’t spelling out every aspect of the plot to camera or the nearest character, his endless stream of consciousness is pure filler which could be lifted from any film noir or superhero movie. For some inexplicable reason every woman The Spirit talks to melts into his arms to make his fight against crime that much easier, though he is far from a James Bond full of amusing quips or devilish endeavours. The Spirit resembles a cheesy predator who might hang around trendy bars and Miller gives him surprisingly few moments to prove his manliness in fights for this introductory offering, sure to offend fans while newcomers find it hard to understand why The Spirit is supposedly such an effective crime-fighter.

Miller pits this paper thin character against his old nemesis The Octopus, a typically over-the-top Samuel L. Jackson who appears in numerous styles of dress ranging from a samurai and scientist to a painfully pantomime Nazi officer. Jackson shouts as loud as he can, bellowing out The Octopus’s desire to become a God among men, but he and the rest of the respected cast can’t cover the flaws in Miller’s weak screenplay which is confusing and tiring in equal measure. Eva Mendes as femme fatale Sand Saref, Scarlett Johansson as The Octopus’s assistant Silken Floss and Jamie King as The Spirit’s spurned lover Lorelei Rox also do their best to deliver their lines without looking puzzled or bursting into fits of giggles, providing evidence of Miller misunderstanding the difference between writing for comics and the screen: he repeats himself numerous times, at two hours drawing the movie out well past its welcome as even the novelty of the visuals wears off to reveal unimaginative directing. There are many moments where it might look good; there are far too few worth remembering.

The Spirit is a complete failure for Frank Miller, mistakenly brought to life with the best intentions but ill-fitting for his vision. It seems Miller was given too much free reign to do as he pleased and too little guidance from Hollywood for his first solo foray into writing and directing. As a result, this may be his last.