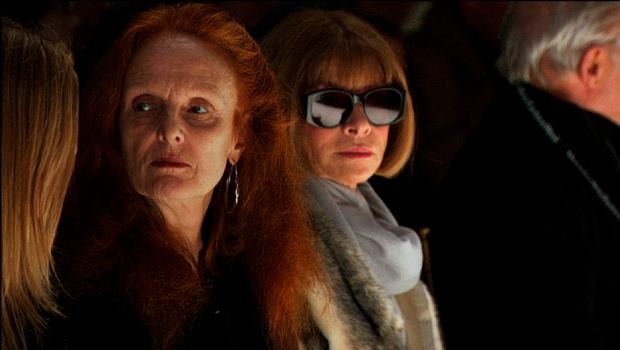 Summary: A funny and illuminating film.

I’m not a true fashionista; I’ve been known to flick through other people’s copies of Vogue and laugh at the clothes on Sex & The City and I was happy to watch The Devil Wears Prada on DVD. So I wasn’t particularly excited by the idea of The September Issue, a documentary about the apparently legendary September Issue of the magazine, which kicks off the new fashion year (oddly, the same as the academic year) and is famous, mainly, for being bigger than the regular issues. Vogue is, of course, edited by the famously acerbic Anna Wintour; apparently the inspiration for Meryl Streep’s character in The Devil Wears Prada, she has an oddly youthful bob, a strangely affectless face, and the weird mid-Atlantic accent of someone born in the UK, living in the US.

Wintour is legendary for wearing sunglasses, being pro-fur, and being mean. Here she comes across, less as mean, more as someone busy who has a tremendous number of calls on her time and who has to make endless snap decisions. She is also, clearly, carrying a massive chip on her shoulder about working in the frivolous fashion industry (her father was editor of teh Evening Standard, her brother political editor of The Guardian). Perhaps as a response, she also enjoys the power she wields, as we see in a number of scenes where she tells designers what not to put in their shows.

But the star of the film is not the armoured Wintour; the real story is that of Grace Coddington, fellow Brit and former model turned creative director. She and Wintour have a employee-boss relationship that we will all recognise; Wintour, sometimes almost cruelly, dismisses Grace’s ideas and cuts her spreads from the layout, while Grace rolls her eyes and bitches. Both recognise each other’s talents, and Wintour admits herself that Grace is the best art director she knows. Grace, in turn, allows that Anna understands the public even as she dismisses the celebrity fashion shoot, starring Sienna Miller, that Anna has greenlit. Grace is funny and warm, but clearly, in the end, lacks Wintour’s ability to get things done.

The September Issue, shot all the way back in September 2007, is also an almost poignant reminder of a happier (or at least more material) age, BCC (Before Credit Crunch), when it still seemed reasonable for girls to spend their whole months’ salary on a handbag. We see the global reach of Vogue, the advertising, the breakfast meetings, the shows and the frocks. We also see Anna’s daughter, dismissing fashion as weird. But that’s about as critical as the documentary dares to be; we see a corseted model happily tucking into a cake, but there is no size debate, no discussion of fur; despite this The September Issue is, still, a funny and illuminating film.