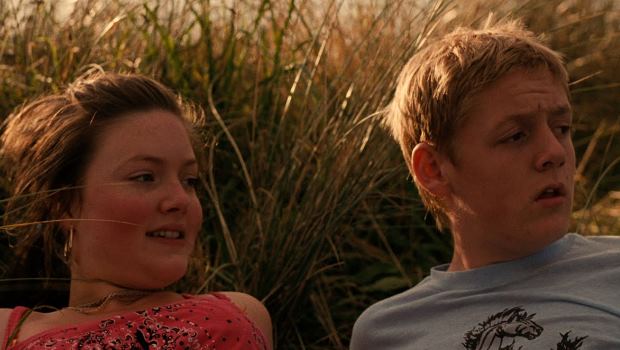 The Scouting Book For Boys Review

Summary: Certainly better than a TV movie, but not quite in the same league as other quality British youth dramas.

Bafta award winning shorts director Tom Harper makes his feature debut with this coming of age drama, starring rising British talent Thomas Turgoose of This Is England fame in the central role as a troubled teen in love with his best friend.

The film begins with David (Turgoose) and Emily (Holly Grainger) indulging in japes and pranks in the soulless trailer park where they live in Norfolk, climbing roof tops, chasing sheep, frolicking in the pool, appearing not to have a care in the world. But there set up soon changes when Emily’s alcoholic mum, Sharon, decides her daughter should move away and live with her father. To prevent this happening David decides to hide Emily away in a cave by the sea without telling anyone, just their little secret.

But the town soon fears that Emily has been kidnapped and a massive investigation and hunt for her ensues resulting in David taking drastic and, at one point, violent measures to keep her to himself and not reveal her whereabouts.

With strong backing from Film 4, Celador and Screen East, and a screenplay from Jack Thorne, writer of Shameless and Skins, Harper’s first stab at feature film making is an impressive, professional one, taking what could have been a humdrum teen drama into darker waters.

The problem is that while Turgoose and Grainger provide solid central performances throughout, the secondary characters, including Sharon (who looks and behaves uncannily like Amy Whinehouse) and Kertzer, the police officer in charge of the investigation, appear almost cartoonish in appearance and mannerisms, which is fine for the lighter tone of the early part of the film, but feels out of place in the more sinister latter stages.

Furthermore, the accents of the characters are very strong, making it hard to understand everything they say, especially Turgoose who mumbles incoherently at times, which might put off some moviegoers, particularly in the US.

Overall, The Scouting Book For Boys is certainly better than a TV movie, but not quite in the same league as other quality British youth dramas, such as Shane Meadow’s This Is England or going back 30 years, Franc Roddam’s Quadrophenia.