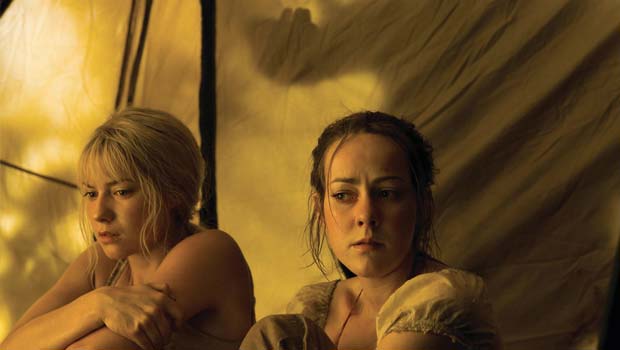 Summary: The Ruins manages to deliver enough uncomfortable moments to entertain even the most hardened horror fan.

An attractive group of tourists head to deserted ruins for an adventure like no other in The Ruins, a typically sun-drenched, drunken idea which soon descends into nightmarish territory when the teens swap sun and sand for a creepy monument of an old civilisation. Based on a best-selling novel by Scott Smith, the trip eschews ghosts or the more popular mindless slasher protagonists of recent horror movies in favour of a nasty surprise which will threaten their lives in a straight-to-the-point gory thriller.

Going from the safety of a bliss-like resort to an undisturbed Mayan ruin that looks far from welcoming will always bring problems in the film world, and a selection of tight-knit college friends become the victims who learn this lesson far too late here. Four students on spring break are convinced by an enthusiastic explorer that heading to the site will make for an unforgettable experience, but, once there, things take a turn for the worse.

Although it was ignored in cinemas, The Ruins is an effective thriller with a sting in its tale. Wasting no time in getting the basics out of the way, Scott Smith’s adaptation of his own novel quickly establishes the characters and gets them off to a perilous situation with locals next to the ruins. A run-in with them switches the tone from holiday fun to one of menace as they are forced into remaining at the summit of the ruined pyramid or be killed. Initially unsure why the natives are so keen to stop them from leaving, it soon becomes apparent: while stricken up the ruins the forest comes alive Evil Dead style. Bringing about scenes of an unsettling nature with root-like shapes wriggling under skin and a spot of uncomfortable surgery-on-the-fly in the form of amateur amputation, The Ruins manages to deliver enough uncomfortable moments to entertain even the most hardened horror fan.

The young cast who have featured in films of all sizes, from X-Men: The Last Stand (Ashmore) and Donnie Darko (Malone) to She’s the Man (Ramsey) and Texas Chainsaw Massacre (Tucker), run with the light-hearted opening and contrast it with the grim desperation they are pushed to by the end. If you don’t empathise with the characters, the tension is lost, but The Ruins keeps the focus on their individual bouts of feverish panic and collective battle against the naturally-occurring enemy to be an entertaining yarn yet nothing particularly original.