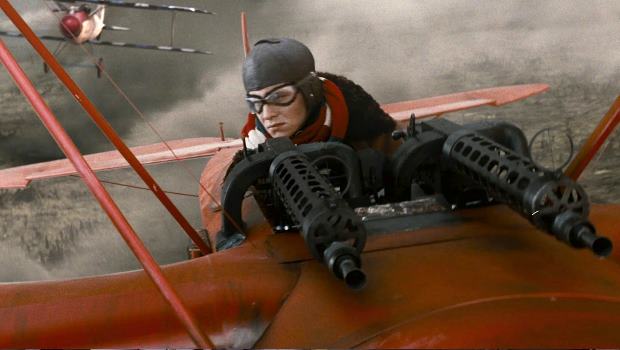 Summary: The script is awful, requiring lines like 'I won't be a sitting duck - I have wings!' to be delivered by the poor actors with straight faces.

The First World War has never had the same cinematic profile as the Second; I’m not sure why. Perhaps its due to historical distance, or the fact that it was just such a miserable, muddy, shell-shocked experience, with none of the ‘just war’ connotations of the more recent conflict. The first technological war, it was also the end of the Edwardian Age and the beginning of the end of European colonialism. But surely there must have been some decent stories?

German director and writer Nikolai Mullerschon has found one of those stories and created an ambitious movie around it; the tale of the most famous World War One flying ace, Manfred ‘The Red Baron’ Von Richthofen (Schweighofer). Opening in 1906, we see the young Manfred out hunting deer when he is disturbed by the sound of an engine. He rides after the aeroplane, enchanted. Ten years later, he is serving with the Imperial German Air Service. A member of the aristocratic Prussian junker class, Von Richthofen and his officer chums see the war as a deadly, airborne game of cricket; indeed they are depicted as chivalrous, sporting ‘knights of the air’, honouring their fallen ‘friends and enemies’ and shooting not to kill but to damage the enemy aircraft while allowing the enemy pilots to land safely.

After one such dogfight, in which Von Richthofen first shoots down a Canadian pilot and then helps to rescue him from the wreckage, he meets pretty nurse Kate Otersdorf (Headey) while helping her apply a tourniquet to the leg of Canadian pilot Roy Brown (Fiennes). Sparks fly between the two immediately but Kate is frustrated by Von Richthofen’s cavalier attitude, especially when he crows with delight at sustaining an injury which means she is assigned to him as his private nurse. She exposes him to the reality of the war in the trenches; at the same time she falls in love with him and pleads with him not to return to the skies. But having finally had his eyes opened, with the war ending and Germany losing men hand over fist, Von Richthofen realises that he cannot hide in headquarters while his men die.

In Germany, where war has routinely been depicted in art as A Bad Thing, The Red Baron aroused controversy by depicting Von Richthofen as a sensitive, courageous hero. In the rest of the world, its more likely to irritate by not being a very good film. Where in the past, German soldiers have been depicted as jackbooted monsters, this Von Richthofen is all eager boyish charm and puppy dog eyes; the real Von Richthofen was a stone killer, instructing his men to aim at the bodies of enemy pilots, not their planes, to save ammunition. His relationship with Lena Headey’s Kate is deeply unconvincing, not helped by the fact the Headey is forced to speak English with a weird Belgian/German accent. For some strange reason, everyone in the film speaks English. At all times. So when Von Richthofen meets Brown, they speak English, Von Richthofen speaks English with a German accent and Brown with a Canadian accent – but what language are they meant to be speaking?

Quibbling aside, the whole film feels oddly stilted, like a greatest hits version of Von Richthofen’s life: one minute he’s in a dogfight, then he’s drinking champage and getting medals, and then he does it all again and again, just changing locations (which we know because it says so on the screen). We never get much of an idea of what did motivate him, apart from it all being a rather marvellous game. He is clearly aware of the risk of mortality, advising his men not to get into fights they can’t win; and those balsa wood and string planes, with no oxygen and no parachute, must have been terrifying to fly. The script is awful, requiring lines like ‘I won’t be a sitting duck – I have wings!’ to be delivered by the poor actors with straight faces. The CGI dogfights are well done, but until Von Richthofen paints his plane red it’s really hard to follow the action in the sky, as all the planes and pilots, in their heavy coats, goggles and caps, look the same.

I think there is a decent film to be made about Von Richthofen, but sadly this isn’t it.