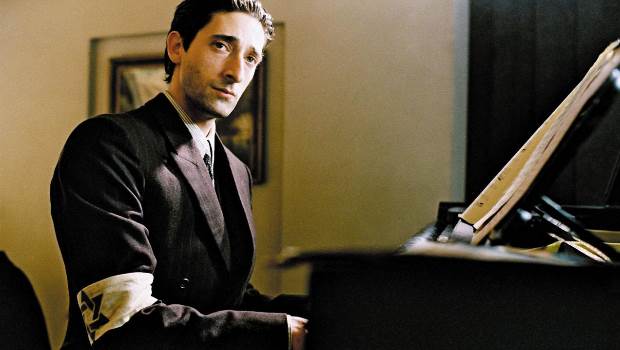 Summary: The Pianist is a rewarding watch, tinged with the deeply personal input of a mercurial director who emphasises readily with the characters and their plight.

The Pianist, Roman Polanksi’s harrowing depiction of survival in war torn Warsaw is now out to own on DVD. The director reached deep into his own past to deliver the true story of Wladyslaw Szpilman, a Jewish pianist of some repute who is forced to eek out an existence amidst the events of The Second World War, where the fear of death at the hands of Poland’s Nazi occupiers was always close at hand. Szpilman’s story in many ways mirrors Polanski’s own tale. His mother was sent to her death at Auschwitz, and he wandered the Polish countryside alone passing from family to family until being reunited with his Jewish father, who survived the concentration camps, after the war ended. No director could be better placed to do justice to Szpilman’s unique story.

The film won the Palme D’or at Cannes last year and further acclaim at the Academy Awards in 2003, picking up the accolades for best picture, best actor for Adrien Brody who plays Szpilman, and most unexpectedly for Polanski himself. Despite measures in place to prevent the diminutive Pole from setting foot on US soil due to alleged sex crimes committed in the late seventies, Polanski picked up the award through the time honoured proxy of a video message! After a successful cinematic run on both sides of the Atlantic the film has been given the customary DVD treatment. Padded out with a range of extras and one particularly interesting documentary about the historical background to the story, where Polanski reveals his own methods of surviving the Polish occupation.

Polanski’s most personal film by far in terms of its content, The Pianist re-evaluates the directors’ pre-occupation with the darker recesses of the human soul explored throughout his career, often in elaborately macabre ways. A sinister yet plainly demarcated force of evil is an ever present in Polanski’s films. Whether it is the elderly couple from Rosemary’s Baby who conspire on behalf of the Devil himself, John Houston’s Noah Cross the wealthy land developer in Chinatown, or the shadowy kidnappers who quietly steal Harrison Ford’s wife in Frantic. The central character is continually terrorised and tested in the face of overpowering evil, which, once ultimately unmasked appears to reside closer to home than is often comfortable to reconcile.

Wadyslaw Szpilman, a local celebrity famed for his recitals on the city radio station, treats the German invasion of Poland with the same quiet unease and vigilance as his family and friends. The relatively peaceful early days of the occupation, coupled with news that Great Britain and France have declared war on Germany, buoy the Szpilman’s hope that all will soon be resolved without too much blood letting. Swiftly Polanski pulls the rug out from beneath the Szpilmans, unravelling their comfortable family lifestyle, with a steady current of persecution, turning to humiliation and then outright debasement. After being segregated into the Warsaw Ghettos and closed off from the rest of the city, Polanski exposes man’s survival instinct in all its brutal rawness. Individual episodes that scour the depths of human depravity, showing Jews turning on one another for money and scraps of food are handled in Polanski’s customarily matter-of-fact style. After his family are transported to the death camps, Szpilman is forced to exist alone in deserted and ruined buildings, at the mercy of sympathisers and under the constant threat of capture.

From a collective depiction of the Jewish struggle in the first half of the war the story gradually becomes more sharply focused upon Szpilman himself. Within the sweeping historical context of the first hour of the film Wladyslaw exists within the family unit, trying desperately to stay as such. After his family is split asunder, an historical sweep turns to penetrating character study, ingrained with palpable moments of suspense. Gone are the overcrowded streets of the ghettos full of dead bodies rotting in the sunshine; Adrien Brody’s quiet, waif like presence absorbs the majority of the screen time. Outliving everyone, Szpilman soon begins to reassert his sense of self despite such a raw existence. He re-establishes contact with the life he once knew through old friends who harbour him in relative safety and by maintaining his meticulous love of music. In one of the most arresting scenes in the film we see Szpilman miming the piano with his hands hovering over the keys in order to not make a sound and be detected.

Polanski pares down the story to one mans plight in the midst of 6 million others and it works resoundingly well. Soon we begin to believe that Szpilman is the only human being left in a devastated Warsaw, held completely at the mercy of outside forces, his loneliness and desperation is acutely observed. From the street-fighting between Polish resistance fighters and the Nazi’s observed from afar, to the tank shells and bombs that rip through his makeshift home, Szpilman’s fate becomes tensely poised with Polanski milking each scene for all its worth so that even in the absence of any notable dialogue or music to enhance the action, it becomes impossible to take your eyes from the screen.

Intensely moving, even on the small screen, The Pianist is a rewarding watch, tinged with the deeply personal input of a mercurial director who emphasises readily with the characters and their plight. Polanski has poured a little bit of himself into this one (and you sense that it’s much more than just his substantial filmmaking talents) but instead of getting too personal he maintains his distance. Never seeking to over-elaborate on the emotion, Polanski chooses to keep things fundamentally austere. As a result the integrity of the story is undiminished.