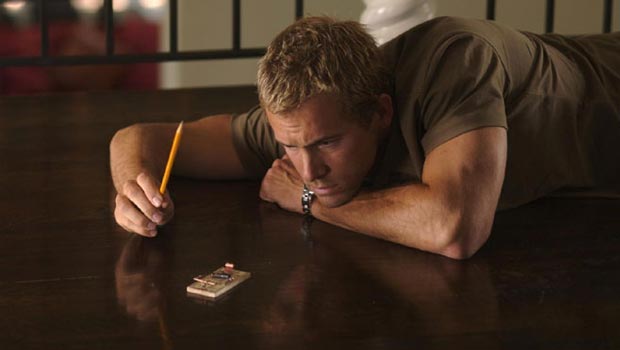 Summary: The performances, especially Reynolds’ and McCarthy’s, are excellent; indeed Reynolds is a revelation.

The Nines is one of those films that gives very little away. The title sequence involves a man tying a piece of green string around his wrist, as you do. It turns out to be a sort of triptych, featuring the same cast existing in parallel universes, for reasons that aren’t particularly well explained, but which have something to do with Ryan Reynolds, who is the star of his own peculiar show.

In one world, he is Gary, an actor, whose drug binges and accidental setting on fire of his house have led to his incarceration in the home of Gavin – also Ryan Reynolds, in another universe – a writer who away shooting a pilot tv show. In the third and last world, he is Gabriel, a famous video game designer, now happily married to Mary (McCarthy) with a daughter Noelle (Fanning) who has a strange habit of showing up in the other universes, and trying to tell him things through sign language. Also seemingly helpful, but frankly bizarre and sinister by turns, is Hope Davis who appears variously as singing neighbour, tv development executive, and, erm, random passerby/possible murderess.

If it sounds confusing, it is… Directed by John August, it pays homage to the work of Charlie Kaufman, David Lynch, and Donnie Darko, but is by no means as profound as it thinks it is. It takes well-aimed pot shots at reality television (the second segment is a Behind The Scenes style puff piece that goes badly wrong when the network fails to pick up Gavin’s show, having forced him to replace his friend Melissa (McCarthy again) with a thinner, better known actress) as well as at celebrity culture and video games. The second segment is actually both enjoyable and well-written, and has some interesting insights into the world of tv which actors and writers will recognise and cringe at. But then it surrounds it all with this metaphysical mystery which isn’t interesting or clever, and amps it all up with an ominous soundtrack.

The performances, especially Reynolds’ and McCarthy’s, are excellent; indeed Reynolds is a revelation. But in the end the film is frustrating; the ending is an anticlimax, and the whole premise collapses like an soggy soufflé into a mess of new agey nonsense. Disappointing.