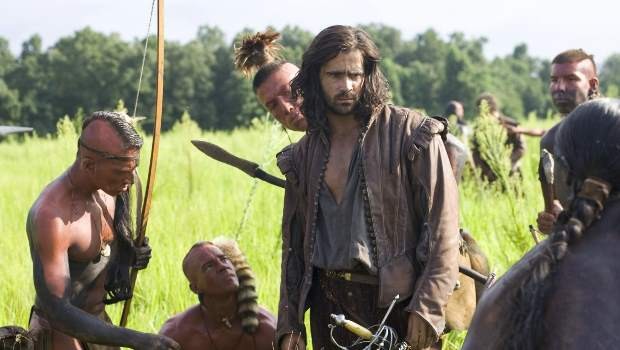 I’ve often wondered what a Terrence Malick script looks like, whether the digressions, when he lets his camera roam to pick out striking or sublime natural moments, are in fact written down, or whether he hands his actors a vague dossier of themes and philosophical interpretations of the material, and then lets the cameras roll. It’s probably a combination of both, and it’s an approach that means Malick’s slender corpus of work is entirely unique – these films couldn’t have been made by anyone else.

Certainly, no one else has approached the well-worn story of Pocahontas and John Smith, and the first English settlement at Virginia, in quite the same way, combining a stark and unsentimental realism with a poet’s eye for the majesty of nature and mankind’s tenuous grasp on it. The use of a recurring motif from Wagner’s Ring cycle as the first English ships enter Virginia bay underlines the mythical elements of this story, and emphasises the fact that these colonists are not just arriving in a new land, but are exploring an entirely new state of mind. It is the struggle between those among them, like Colin Farrell’s Smith, who recognise the potential for this psychic rewriting of their nature, with those who approach the colony as a purely mercantile opportunity, that makes the settlement’s first months and years dependent in many ways on the goodwill of the Indians, or ‘naturals’, as the colonists call them.

When Smith is dispatched upstream to make contact with the Indians’ tribal chief, his life is spared by the chief’s young daughter, Pocahontas (Q’orianka Kilcher). Pocahontas is commanded to learn what she can from the Englishman, to determine whether they will pose a long-term threat. Forging a close bond with Smith, she is soon helping the starving and depopulated settlement manage their crops, a course of action that puts her at odds with her father, and that leads to the first conflicts between the settlers and the natives. When Smith is ordered back to England, he allows Pocahontas to believe that he has been killed in the crossing, allowing John Rolfe (Christian Bale) to step in and marry her, a decision that will see her Europeanised and called to the court of King James in London. The Indian princess Pocahontas’ story ends in the improbable location of a Gravesend churchyard, when she contracts a fever and dies.

It is to Malick’s great credit that he eschews the easy option of presenting the Indians as a race of Rousseau-esque noble savages, or the English settlers as rapacious exploiters. Neither was the case; Malick is equally aware of the mad courage it would have taken for the settlers to throw themselves across thousands of miles of sea to an unknown country, as he is of the equilibrium in which the Indians lived with their land. He is making no rhetorical point here, and his main concern is to present the sheer alien nature of each culture to the other. In a film of stark and beautiful images, none are stranger and more surreal than that of a fully-armoured John Smith wading through a prelapsarian swamp, or Pocahontas’ war-painted and feathered native companion sitting amongst the panelled wood of a Gravesend dining room. Malick does not even go for the sentimental option that love can provide a bridge between the cultures; the potential is there, but is denied by Smith’s awareness of his own nature, while Pocahontas is forced to deny her own culture and become a European lady before she can find love, of a sort, with Bale’s John Rolfe.

Farrell delivers an extremely effective and melancholic performance, while Bale’s quiet dignity perfectly evokes his character’s gentle nature. The real breakout performance is that of Kilcher however – strikingly beautiful, tempering her character’s naivety with an innocence that does not leave her even when she is introduced to the unimaginable scale of Jacobean London, Kilcher is a perfect prism through which Malick can project his poetic and uncompromising vision.