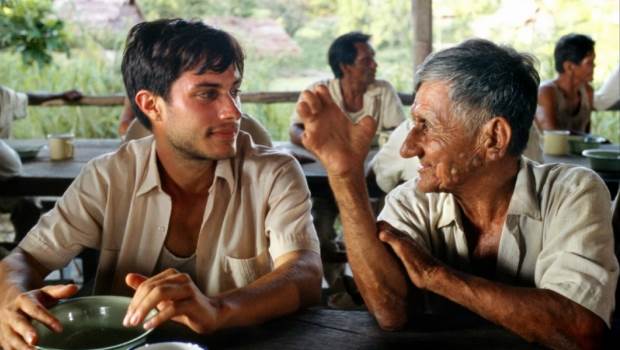 Summary: The road movie, the buddy movie, the character study and the political drama but never gets stuck in one place, thus maintaining its equilibrium.

In adapting a very personal account of one man’s voyage across South America, Brazilian director Walter Salles has mapped out his own captivating portrait of a continent filled with contrast.

The Motorcycle Diaries is taken from the now legendary diary of Ernesto “Che” Guevara: self-proclaimed hero of the revolution, martyr and the convenient face of rebellion adorned across walls in student flats the world over. The man’s legacy is assured: after helping Fidel Castro drive the Americans into the sea (or at least into Guantanamo Bay) he met his end taking the revolution into the heart of south America where he was assassinated by the CIA in the Bolivian jungle. It may seem like his evocative life story, an ever lasting symbol of one-nil to the little guy, resonates more today than ever before but how much do we really know about the man behind the mythology? Salles’ film offers something of an insight.

Long before Guevara was a legend he was a fresh faced medical student from Argentina, eager to wrest the wanderlust from his soul and see something of the world. He and a companion, Alberto (Rodrigo De La Serna) fire up an old Norton 500 motorbike, nicknamed “The Mighty One”, and set off to scour the continent in search of adventures, both cultural and carnal.

A road movie that begins someway between a sumptuous travelogue and a light-hearted romp quickly develops into something much more significant. A growing depth to the narrative can be traced through Guevara’s brooding sobriety as he witnesses the many problems that have beset the poorest peoples of South America. The schoolboy appetite for fooling local girls with their made up stories and getting into trouble at the expense of their overactive, but continually starved, sex drive diminishes into a darker world of social injustice and inequality that resonates profoundly. By the time the two young wanderers arrive at their destination, a leper colony on the banks of the Amazon that acts as a convenient cipher for Guevara’s emerging worldview, an overwhelming sense of destiny overtakes the narrative.

Walter Salles has succeeded in producing a faithful and accessible tale that genuinely moves. The Motorcycle Diaries is deliberately pious in handling the Che Guevara myth, and the narrative is shot through with self-righteousness, but Salles manages to open up the gentle humour and innocence of the book to keep any on screen canonization of “El Che” firmly in check. Guevara’s journey towards immortality is plotted out neatly, with every subsequent adventure serving to establish and exaggerate the young man’s growing social conscience. Episodic scenes, some charming some moving, slot together to form a tight plot that conveys character with a good deal of enjoyment . Gael Garcia Bernal (A Mexican last seen in Almodovar’s Bad Education) generates a rangy performance in the lead, blending choirboy looks with an intensity that burns. He manages to embody the spirit of a man on the verge of a great change with ease. Thankfully his moral depth (always in danger of getting boring) is beautifully complemented by Rodrigo De La Serna in the role of his lecherous travelling buddy Alberto, who never fails to muddy the waters with a comic moment or two.

The Motorcycles Diaries works because, like any traveller, it never lingers in one place too long. It visits the road movie, the buddy movie, the character study and the political drama but never gets stuck in one place, thus maintaining its equilibrium. Salles effectively plants the seeds of Guevara’s struggle, stating his case personally in the process, without allowing the film to wallow. The film feels light and uncomplicated to the last, remaining true to the naive spirit of adventure that inspired the journey, whilst illustrating, with great craft and compassion, how many miles, mountains and life-altering experiences it takes for a man to truly grow.