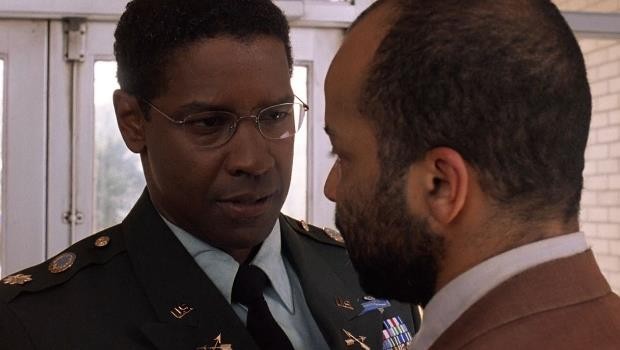 Summary: Washington is superb as the paranoid soldier out to seek the truth, as is Streep as the enjoyably monstrous mother whose ambitions for her son supersedes all else.

The last couple of months have seen a glut of politically-aware documentary films, which have tackled subjects ranging from George Bush Junior (Fahrenheit 9/11), big business (The Corporation), McDonalds (Super Size Me) and paedophilia (Capturing the Friedmans). There has not, however, been a corresponding number of non-documentary fiction films that have based themselves around a contentious political issue (there is the argument that all films by their very nature are political. But this ain’t a postgraduate lecture on Eisenstein, so we’ll set this argument to the side for the moment). Probably the only film in recent months that has been even a little bit consciously political was the environmental disaster flick The Day After Tomorrow. But even the relatively unsubtle message this film was trying to express (stop polluting the earth or we’ll all end up suffering from the kind of weather even Michael Fish can’t get wrong) was waylaid by a dire script and some pretty awful acting.

All hail then, The Manchurian Candidate. For this Jonathon Demme-directed, Denzel Washington, Meryl Street and Liev Schreiber-starring remake of the 1960s film of the same name, is that rare of beasts – a film that not only manages to entertain but which also manages to challenge and provoke its audience into thinking a little deeper about the state of the world and how it is run.

In The Manchurian Candidate, Denzel Washington plays U.S. Army Major Bennett Marco, a man who spends his days giving inspiring speeches about his platoon’s ambush in the Kuwaiti desert in the first Gulf War and in particular, the heroics of Sergeant Raymond Shaw (Schreiber), who won the Medal of Honor (the actual medal, not the video game) for saving Marco’s crew. During the night, however, an increasingly paranoid Marco finds his memories of that fateful night take a terrifying turn. When one of his old crew, Corporal Al Melvin (the ever-excellent Jeffrey Wright) approaches Marco complaining of the same sinister dreams, the Major decides it is time to finally try and find out exactly what happened in the Kuwaiti desert.

His decision to probe deeper into his own muddled thoughts is also influenced by the fact that Shaw – think of a young, better looking John Kerry with a war record that, on the face of it, even Karl Rove couldn’t question – is now a seemingly sure-fire candidate for vice president. It’s a ticket that has been fixed by the controversial but influential Senator Eleanor Prentiss Shaw (a barnstorming Meryl Streep), a Freudian wet dream of a mother who is determined to see her son rise to prominence – whatever the cost.

As Marco digs deeper into the night that changed his life forever, he begins to realise the exact extent of this cost, and soon he is danger of jeopardising not just his sanity, but his very life.

The Manchurian Candidate is a highly satisfying conspiracy theory thriller. Washington is superb as the paranoid soldier out to seek the truth, as is Streep as the enjoyably monstrous mother whose ambitions for her son supersedes all else – even his own happiness. Schreiber is eminently watchable, managing to imbue his character with so many different emotions, that you are never sure where he’s going to end up – and he keeps you guessing right till the very end.

Demme runs a tight ship and he knows how to produce a film that draws his audience in, even with a plot that is relatively guessable, and a narrative that hardly whizzes along. He does this, not simply through the strength of his cast (although this definitely helps), but also by dent of the fact that he is just good at what he does. Not needing to rely on visual fireworks (unlike Washington’s other recent director Tony Scott), Demme produces scene after scene that are well-paced, well-lit and well-acted. Demme might sometimes be accused of being a workman like director, but with work like this, who’s complaining?

The ace up Demme’s sleeve however, apart from the strength of his cast, is the political awareness he injects into the proceedings. From the opening scenes, with Marco’s crew crouched around a poker game in the back of a military vehicle, with Wyclef Jean’s ‘Fortunate Son’ blaring from the sound system, it is clear that this film has a political head on its shoulders. From these subtle yet powerful opening scenes (it’s the poor and the disenfranchised who fight for the wealthy and powerful), The Manchurian Candidate explores a multitude of political ‘issues’ to a lesser or greater extent: the ill that is committed under the guise of defending a nation; the behind-the-scenes machinations of any country’s political process; the unpalatable relationship between entertainment, money and politics, and most specifically, the enormous influence big business has on politics and politicians.

The way Demme tackles these issues might not be to everyone’s tastes – he has a clear, although not exactly earth-shatteringly-original, agenda and is not afraid to pursue it. However, for those who want to see a bit of politics in their cinema, but who also wish to be entertained rather than lectured at, The Manchurian Candidate partly fills what, at the moment, is a rather big gap. Hopefully Demme’s film will be a success and it will encourage industry figures not to see politics and Hollywood as incompatible bedfellows. Because unfortunately, cinema is as influenced by business as politics, if not more so.

Although I doubt we’ll see a film on our screens examining that relationship for a good while to come.