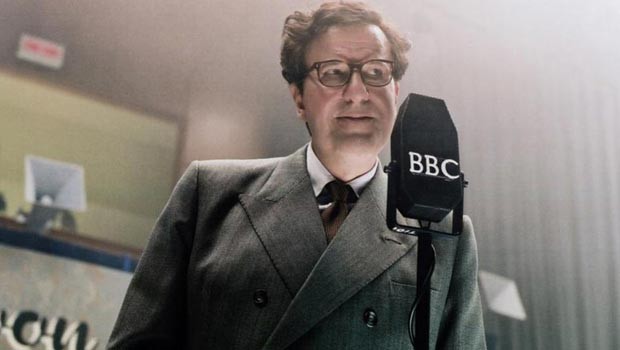 The Life and Death of Peter Sellers Review

Summary: Perhaps if you already know the story of Sellers’ life you will get more out of it, but I found it left me cold.

Adapted from the book by Roger Lewis, The Life and Death of Peter Sellers is a portrait of a man willing to make big sacrifices in order to pursue his dream of fame, and of his never ending search for himself.

We first meet Sellers, played with conviction by the impressive Geoffrey Rush, as he is starting out in show business on the Goon Show. While he appears to be enjoying himself on stage, we soon learn that he is craving more than just notoriety as a radio comic. After a very brief and dismissive meeting with a film casting director (Alison Steadman), Sellers has a heart to heart with his Mum, Peg (the excellent Miriam Margolyes) who advises him not to give up.

As we are well aware, he doesn’t give up. Not on his pursuit of fame at any rate. Unfortunately, everything else in Sellers’ life slowly crumbles as his ambition and self-absorption push those who love him further and further away.

First to go is his wife Anne, played with a slight lack of conviction by Emily Watson. At times I was drawn in by Watson’s performance and I really felt her heartache, but at other key moments she seemed detached from the action. Perhaps this is a true portrayal of how Anne Sellers coped with her husband’s erratic mood swings and childish behaviour, but dramatically it doesn’t work.

In fact, that could be said of the film as a whole. Despite the presence of Geoffrey Rush, who carries the film with genuine charisma, there is little to keep the audience gripped. This may well be due to the totally unsympathetic character of Sellers himself. If this film is anything to go by, he was not a very nice man.

While I really felt for those around him, particularly his children who had to contend with another child in the house; overgrown, spoiled and selfish, I felt very little for Peter Sellers. I couldn’t comprehend how such a man could have a successful career and a string of beautiful wives!

The episodic nature of the action on screen does not leave a lot of room for moments of delight and as such Sellers comes across as a bit of a monster, constantly dissatisfied with his performances and his life, always searching for something more.

For a brief moment, in his marriage to Britt Eckland, Sellers seems genuinely content but it doesn’t last. Charlize Theron is both beautiful and convincing as Eckland. I wish more had been made of their relationship, but alas Director Stephen Hopkins was keen to move on and we briefly see their marriage hanging by a thread before it disappears altogether.

Sellers’ relationship with Pink Panther director Blake Edwards is likewise very tempestuous, but you get a sense that they love to hate each other. John Lithgow is highly entertaining and almost unrecognisable as Edwards, one minute pleading with Sellers to do another Pink Panther film, the next regretting it.

Despite a great cast, the film just doesn’t live up to its potential. It is too bogged down with trying to be ‘clever’; the soliloquies with Rush as Sellers as the other leading characters are testament to this. Perhaps if you already know the story of Sellers’ life you will get more out of it, but I found it left me cold.