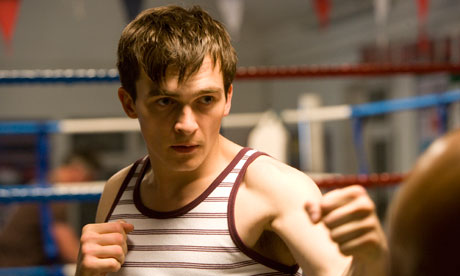 Summary: It has pitch-perfect, assured performances and direction and an engaging, heart-rending story.

The Kid and The Kid Moves On were the bestselling memoirs of author Kevin Lewis’ turbulent childhood spent tossed between inadequate foster homes, a horribly abusive Mother and a callow, alcoholic father before becoming a naive underworld pawn and finally a successful crime writer. The Kid’s iconic front cover of a child in a checked shirt, head down, with his back to us, was unavoidable in every high street upon its publication in 2003 and its success spawned a sub-genre of books about child abuse. What Lock, Stock… alumni turned director Nick Moran has done is taken a book which was only found on your mum’s bedside table and given it an involving, universal appeal in a mostly successful blend of genres including the boxing flick, crime drama, coming of age story and romance. It is a film full of dichotomy, at once brutal yet tender, gut-punching yet exhilarating, fantastic yet realistic.

The Kid opens with an audacious credits sequence worthy of David Fincher and proceeds to the most involving first 30 minutes of any film in recent memory. Moran deftly sidesteps the clichés involved in depicting child abuse on screen. Kevin’s mother’s attacks on him are brutal but never explicit rendering events saddening and harrowing (a trickle of thick blood emerging from Kevin’s forehead, his mother chucks him a rag and tells him to “clean yourself up and fuck off to school”).

As Kevin’s mother Gloria, Natascha McElhone is as unrecognisable and hideous as Charlize Theron in Monster, her wide-eyed English rose beauty totally obscured behind greasy hair and skin, grotty teeth, thick glasses and a foul, hateful tongue. It’s an astonishing transformation and McElhone’s best performance to date, at once capturing Gloria’s vileness and her hidden brokenness and dependence on her shattered family. Equally impressive are the three incarnations of Kevin, the childhood, teenage and adult versions played with equally brilliance by William Finn Miller, Augustus Prew and Rupert Friend respectively. Each embodies Kevin’s pent-up rage, vulnerability and frustrated ineffectuality perfectly, with particular kudos going to Prew. The casting is faultless with Bernard Hill, David O’ Hara and Ioan Gruffudd all making impressions.

As a director, Moran is developing an engaging and confident style, though his flourishes can be traced. He has a Scorsese sharp sense of soundtrack, giving things a real sense of place and time by using everyone from Satie, The Doors, Paul Weller and Pachalbel to Black Box and Pat and Mick. The fight scenes recall Guy Ritchie’s Snatch and Fincher’s Fight Club but have a new sense of elegance and drama. One or two sequences truly stand apart. A seamless 360 degree pan around a classroom sees the students’ styles change with every rotation (along with the music) from Grange Hill to new romantic to ska punk seemingly in one unedited move (touchingly, Kevin’s attire and demeanour remain the same throughout the shot).

After the electrifying first act, the longer second half of the film isn’t quite as well handled. Kevin goes from bullied and socially inadequate to foster kid from heaven, to living in London, to aspiring market trader to underground boxer to bar owner in the space of a few short scenes, skipping over many life changes without just focussing on one or two elements in depth. This short shrift undercuts empathy with the characters from then on and becomes just about waiting for Kevin to finally grow a pair and stand up to the shady crime figures who are using him for their own gain.

Confrontations and reunions with people from Kevin’s past are expected but never materialise and Moran goes for an uplifting finale (Kevin gleefully gets one over on the big boss, then gets the girl in a scene straight out of a Richard Curtis movie) which does deliver, but would feel fanciful and neat if it weren’t so clearly true (Lewis hand a hand in the screenplay). Though the shifts in tone may be one too many for some, The Kid is affecting and transporting. It has pitch-perfect, assured performances and direction and an engaging, heart-rending story. The Kid has done good. And that applies to both Lewis and Moran.