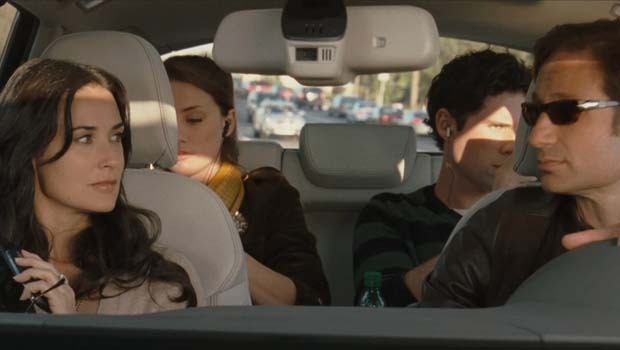 Summary: The Joneses does succeed in presenting its attack on consumerism.

The idea we all buy what we do because the consumer can be manipulated into thinking they want anything by canny marketing provides the platform for a innovative concept for The Joneses. David Duchovny and Demi Moore play married couple Steve and Kate Jones who, with two teenage children, seem to be living the high life with a fabulous home, all mod cons and an incredible social life: they are the envy of their posh, suburban neighbourhood filled with mansions and all the trappings of the upper middle class. But all is not as it seems.

The Joneses are in fact a living sales pitch: their job is to live like a normal family and push products onto their “friends” in a bid to beat rivals based in other suburbs. So while a normal family bicker over what colour to paint the living room or what games console to buy, this unit are trying to tell others what to spend their money on.

It’s an interesting idea for a satire on modern commercialism. Duchovny uses the same smarmy character seen in Californication to present Steve as a driven seller who loves to entertain in his successful businessman persona while Demi Moore does her best WAG impression as gorgeous housewife Kate dressed in designer labels and keen to show them off at every opportunity to the envy of her friends. In public they are the darling couple of the neighbourhood, in private they are at each other’s throats trying to out-do one another. The kids have their own targets too, however dealing with everyday teenage angst as well as trying to do a job, proves to be a juggling act which makes life tough at times – especially when members of the opposite sex get involved. Yet, while you can’t fault the idea behind The Jonses and the presentation of marketing companies as sly corporations with employees who will stop at nothing to ensure they make the most money will touch a nerve with audiences, the delivery so glossy it’s as thin as the fake characters The Joneses embody in their day-to-day lives.

There’s such promise in the set up of The Jonses, it may well have worked better as a sit-com than a full length movie. Seeing Steve, Kate and their kids briefed every week with a new product to sell and then watching them attempt to get their neighbours to buy it would have been a winning formula and left plenty of opportunities to poke fun at marketing strategies. However, where The Joneses falls down is that as a film, there needs to be more substance and when the idea of the concept wears off and the characters are required to develop to build a rounded story, the narrative becomes stale. The tensions between them all are standard fare of questioning identity in a fake world and dealing with understanding oneself to be happy, though all in a very simplistic way. When you consider what the marketing company behind The Joneses existence is all about, there should surely be a darker edge to the satire than a saccharine plot that feels lifted from standard rom-com affair. Taken at surface level, The Joneses does succeed in presenting its attack on consumerism; and for that alone it sparks up talking points and will leave you to think about exactly why you bought the model of car or mobile phone you did.