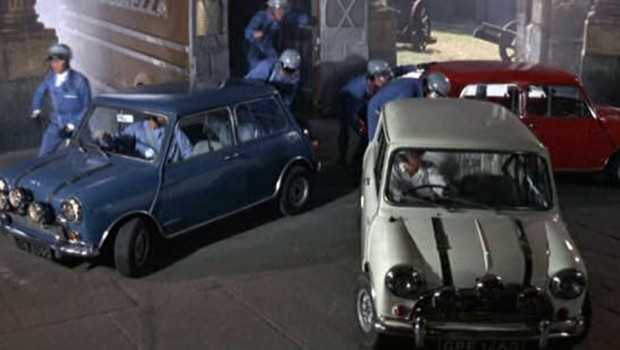 Summary: The Italian Job is a truly distinctive classic that will hopefully be showing for a few more Christmases and Bank Holidays to come.

An English institution as ingrained and blissfully unnecessary as moaning about the weather or queuing, The Italian Job has charmed people out of their armchairs for years as a perennial Christmas schedule filler lumped in with similar staple classics, such as The Great Escape, Zulu or any and every Bond film you’d care not to mention again and again.

Fortunately, The Italian Job has now officially passed down into household folklore thanks to a nineties reappraisal off the back of “Cool Britannia” (TM Loaded, Damon Albarn and Damien Hirst). Recent history brought the movie home to a younger generation of viewer’s eager to devour up anything vaguely related to an era Liam Gallagher thought was cool. Thankfully, for the discerning movie fan The Italian Job transcends any naff retro associations and is certainly a much more entertaining film than a couple of choice Michael Caine one-liners would suggest.

Very much of its time without ever looking too dated; The Italian Job embraces the classic caper set-up. Take your loveable cockney rogue with a taste for life’s’ illegal finery, recently released at Her Majesty’s discretion but already eying another shot at the big time. Add a fiendishly intricate plot to steal the city of Turins’ gold supply right in the heart of its traffic-clogged centre, from under the noses of the local mafia. Throw this together with some suave 60’s window dressing, memorable cameos and possibly the coolest, and most original, automotive climax in movie history and the words “classic movie” suddenly starts flashing in letters so gaudily bright that they make Austin Power’s entire wardrobe appear drab and grey. No wonder they wanted to cash in on a remake.

Michael Caine summons up a performance brimming with the necessary charm to bind the whole thing together. His rough diamond, small-time villain Charlie Croker rebounds between success and failure with regularity. Masterminding the entire operation in a less-than-assured manner, writing off numerous Mini’s and trucks before they are ready to roll, Croker wins the trust of his criminal colleagues and forms an uneasy alliance with Mr Bridger (an imperious Noel Coward) London’s very own gangster-poet, who bank rolls Crokers’ ambitious endeavour from behind Wormwood Scrubs’ uninviting bars. The bungling ineptitude of Crokers’ gang allows for some comic mayhem, setting up the “job” itself and final twist at the end. Just when they thought they had nailed it, overconfidence threatens to bring them back down to earth with a crash that would echo throughout the Alpine valleys they are traversing. So, what can you say about one of cinema’s most memorable endings? Finely balanced in every sense, and inventive, it wickedly encapsulates everything that the film stands for in the ultimate, terminal twist of self-deprecation, fast reminding everyone that the British hate people to get too big for their boots. At last, we can all sit back and have a thoroughly satisfying gloat at the predicament Charlie and the boys find themselves; something of a pre-common market pickle smeared all over their almost perfect heist.

The Italian Job is a product of its time and, moreover, of its place. It transfers the light-hearted spirit of an era directly onto the screen, revelling in the vibrancy of early sixties culture, never failing to flash the right card in order to cash in on the mood of the era. It is rooted in an idiosyncratic (and somewhat anachronistic) depiction of the British Nation, which encompasses everything from slapstick carry-on style humour to the class struggle!!! For every scene that is timelessly cool (most of the scenes featuring Caine) there is a counterpart that is ludicrously parochial (all of the scenes featuring Benny Hill!) but so endearing.

The soundtrack, overseen by American producer Quincy Jones, hops between smooth lounge acts such as Matt Munroe (who croons in the opening credits with “Days like These”) to terrace chants such as “The Self Preservation Society”, which plays triumphantly as the smugness grows. The automotive choreography of the climactic sequence is stunning. The red, white and blue Mini’s bamboozle The Italian authorities right across the city in a chase scene that is so full of humour but never lets up on the throttle in terms of tension. The indulgence of the “romp home” is only matched by the sheer ignominy of a bus full of British hoods teetering on the edge of an alpine ledge, with Caine’s chirpy optimism remaining unperturbed throughout: “Hold on a minute lads, I’ve got an idea!”. What a way to end a film.

Europe’s gold might now all be in Brussels; the Mini’s are being manufactured in Munich and the film has just been transplanted by a bunch of Americans, but there will always be a part of some small screen somewhere that is forever British. The Italian Job is a truly distinctive classic that will hopefully be showing for a few more Christmases and Bank Holidays to come.