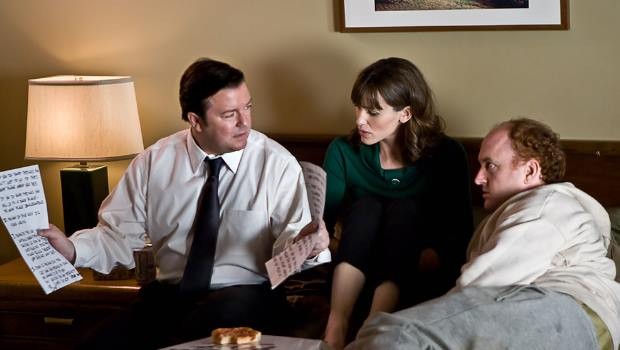 The Invention of Lying Review

Summary: His characters become two-dimensional and the end is far too obvious to be rewarding.

Ricky Gervais takes centre stage as star, co-writer and co-director of this quirky comedy that doesn’t know whether to be a smart indie flick or opt for slushy romance. It begins in a world where no one can lie – adverts are dull and lifeless, all films are based on fact and dates are even more horribly uncomfortable as prospective couples are brutally honest about their thoughts. It’s a set-up which enables Gervais to play up his favoured awkward laughs as screenwriter Mark Bellison, a short, stubby-nosed loser about to get fired who attempts to punch so far above his weight with the ladies it’s embarrassing from the moment he’s greeted to the moment they depart. When he discovers you can tell lies – a concept so alien to others they’ll believe all he says no matter how bizarre – The Invention of Lying enters a near-Twilight Zone of weirdness before coming apart at the seams with too much rom for the com.

The premise Gervais sets out is an intriguing one. When he meets the gorgeous Anna (Garner) for a meal set up by one of his friends, their first talk is of her initial dislike of his looks while he states he hopes the night ends in sex. Such brazen honesty is rarely heard in real life, and the extension of this into a hostile workplace and among Mark’s acquaintances such as Frank (Superbad’s Jonah Hill) who speaks frankly about his attempts to kill himself every night are well thought out to expose some of the thoughts we have but never reveal. The life we see in The Invention of Lying is almost an advert for telling lies, much as it might pain us to think it.

When Mark discovers what to lie is, the film warps turns many of Mark’s situations on their heads. Suddenly he can pay his rent thanks to a computing error and write mythical stories of aliens visiting Earth to get his job back and produce the best film ever made. He becomes rich and famous through his lies, though one lie propels him to a position far more uncomfortable than ever: he makes up a tale of the afterlife to his dying mother and is overheard by astounded doctors and nurses. Suddenly a prophet overnight, Mark sees his lies spiral out of control while Gervais desperately seeks a way to tie his film up with a respectable ending.

It is here the comic fails to effectively conceive a conclusive idea as innovative as the initial twist of a man discovering the ability to lie in a world of truth. His characters become two-dimensional and the end is far too obvious to be rewarding. It’s a case of nice try, must do better next time. That said, there is at least one heart-wrenching moment which will convince any of those who remain sceptical of Gervais’ acting ability that he can muster up emotion, he just needs to give himself better material to work with.