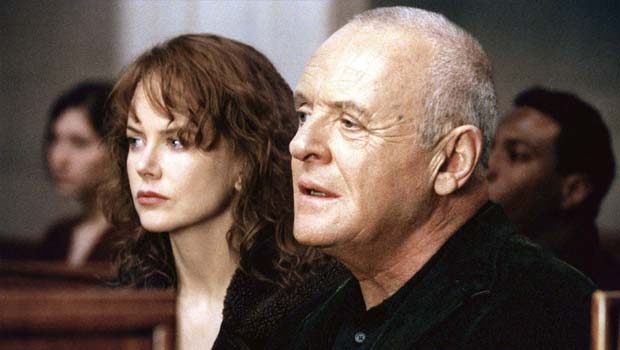 Summary: The Human Stain aims to create a glaringly obvious spot that can be quickly wiped away, rather than a more subtle but indelible mark, and is a lesser film because of it.

The Human Stain is an adaptation of the book of the same name by the great American novelist Philip Roth. The final part of Roth’s trilogy about post-war America (which began with ‘American Pastoral’ and ‘I Married a Communist’), The Human Stain is the story of Coleman Silk (Anthony Hopkins), an eminent Jewish professor whose supposed history belies a far more complex past. A master of self-reinvention, Silk is much more than he claims he to be, and The Human Stain is in part an unravelling of Coleman’s real life, exposing that which he has long denied to himself and to others.

The cracks in Coleman’s carefully designed persona begin to appear when he is charged with using racial epithets to refer to students missing from his class. He calls them ‘spooks’, as a way to describe their lack of physical presence, not knowing that the students in question are African-Americans. By using a term that has racist connotations, Silk is himself accused of racism, and is forced to resign from his position in the college. Ironically, far from being that which he is accused of being (namely a prejudiced Jew), Silk is in fact himself a man of colour. Born with light skin, Silk discovered whilst young that he was able to ‘pass’ as white. Witnessing the strict limitations forced onto his intelligent and cultured father because of his colour, Silk recognised the freedom that re-inventing himself would bring, and when the opportunity presented itself for him to be someone other than who he was, he grasped it.

Set in 1998 during the height of the Clinton-Lewinsky affair, The Human Stain is also concerned with issues surrounding sex and intimacy, as the older Coleman embarks on his own scandalous relationship with Faunia Farely (Nicole Kidman), a local cleaning lady (and probably the most beautiful ever committed to celluloid). Ignoring the malicious gossip of the college community with whom he resides, the couple fight against those forces (including Faunia’s psychotic ex-husband Lester, played by Ed Harris) that are trying to deny them their chance of happiness.

Unsurprisingly for a Phillip Roth adaptation, The Human Stain evidently deals with a range of complex issues, including race, identity, class and sex. Again, unsurprisingly for a Hollywood movie (the basis of which is a novel by a middle-aged man), it is this sexual relationship between Coleman and the much younger Faunia which dominates The Human Stain. Given that Coleman and Faunia are played by two of the biggest stars around, there is therefore a danger that the scenes of a sexual nature between Hopkins and Kidman will distract attention from the more challenging elements inherent in the film.

It will be unfortunate if this is indeed the case, because the scenes between Hopkins and Kidman are the least interesting moments in the film. Far more intriguing is the time spent with Silk as a younger man (played by the excellent, albeit impossibly good-looking Wentworth Miller) as he attempts to forge a new life for himself by passing himself off as a Jew. The film is undoubtedly successful in its attempts to express the difficult contradiction between an individual’s right to identify themselves in any way they see fit, and their responsibilities towards recognising that which they truly are. Although in a society where ethnic pride is now a given, it would be easy to rebuke Coleman for his lack of pride in his heritage and his attempts to deny his true self. The Human Stain, however, does not judge his actions. Instead, it clearly illustrates the injustices that were inherent in a pre-war American society that pushed Coleman into making such a life-altering decision, as well as the sacrifices the young man had to make (such as an estrangement from his family) in order to gain his perceived ‘freedom’.

Although it is possible to raise complaints regarding content, The Human Stain is perfectly adequate in terms of style. Directed by Robert Benton (Kramer vs. Kramer) and shot in wide-screen by the late cinematographer Jean Yves Escoffier, the film makes good use of the stark, frozen landscapes a majority of it is set in, and the film’s fluid camera movement cleverly echoes the fluidity of Coleman’s persona. The film’s performances score fairly highly as well, in general. Arguably, Kidman tries too hard to be believable as ‘poor white trash’ and therefore does not end up as such, and her strenuous efforts are put to shame by the still qualities of Ed Harris, who projects more emotion when silent than Kidman does during her most fevered histrionics. As for Anthony Hopkins, it could be argued that he is unconvincing as a black man and even less so as a Jew, (he barks ‘chutzpah’ as if it is the first time the word has ever left his lips), but ironically this only helps to enrich the notion of identity that so dominates Coleman’s life.

Yet no matter how polished the film looks, or how interesting its performances, the overriding feeling invoked by The Human Stain is one of missed opportunities. In an age where identity is on the one hand becoming ever more malleable, but on the other is increasingly used to define a person or a people, The Human Stain sacrifices a proper exploration of Coleman Silk’s decisions to become that which he chooses to be, in favour of some tabloid-headline grabbing nooky. Whether the fault for this lies with Roth or with the film itself is debatable; either way The Human Stain aims to create a glaringly obvious spot that can be quickly wiped away, rather than a more subtle but indelible mark, and is a lesser film because of it.