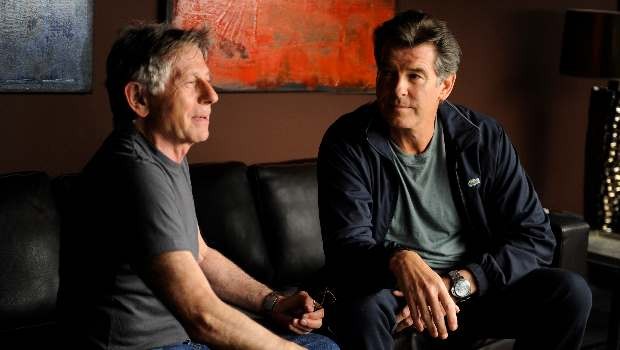 Summary: An enjoyable piece that is just far-fetched enough to be true.

The last time Ewan McGregor and Tom Wilkinson starred in a film together it was the risible Cassandra’s Dream (my eyes! that’s two hours of my life I’m never getting back). Thankfully this time their director is not some has been with a dubious sexual history – oh, that’s not quite right, is it? Still, all three of you that saw Cassandra’s Dream will be pleased to know that The Ghost is a much, much better film. Adapted by Robert Harris from his own novel, the film is the story of a young writer (McGregor), hired for a generous chunk of change to ghost-write the autobiography of disgraced former Prime Minister Adam Lang (Brosnan). Harris, a former journalist, has openly admitted that he based Lang on Tony Blair as a result of his increasing disillusionment with the Labour Party, and this is made apparent in the film with constant references to Iraq, warcrimes and the special relationship. (There are enough differences between Lang and Blair that the filmmakers get away with it.)

The ghost takes the job, despite finding out that his predecessor died in mysterious circumstances, and being mugged on the same day, and flies to a rainswept, gloomy hideaway off the North Atlantic coast of the US, where Lang, his wife Ruth (Williams) and his entourage including his assistant Amelia (Cattrall). Tensions are running high; there are protestors and news media camped outside the house and the news is on 24:7. Struggling to do his job under these conditions, the ghost is disturbed to find that he is sleeping in a dead man’s bed, with his belongings still in the wardrobe. And its among the dead man’s things that he finds the first hint that all is not well and that the story Ruth and Adam have told him is not the truth.

The Ghost is an entertaining, gripping and well made thriller. The dreich landscape and colour palette (all wintry greys, stripped of any brightness) conjures up an atmosphere of dread, and if the score is sometimes a little bit heavy handed, its nonetheless effective. It is very true to the book, and sometimes the plot twists that work well on paper are less believable on celluloid (can you really google CIA employees so easily?). ewan McGregor continues to struggle with an English accent but is otherwise better than he has been for a while (and yes ladies, he does take off his clothes, though only for a brief flash), Pierce Brosnan thankfully avoids doling a Blair impression (though he does have a nice rictus grin), while Olivia Williams conveys a steely cynicism than masks her hurt and loneliness.

There are few annoying bits of product placement – who asks for the Evening Standard boarding a plane when you can get a free copy outside every tube station? And would Sky News really show someone being waterboarded, even in reconstruction? but quibbles aside, this is an enjoyable piece that is just far-fetched enough to be true.