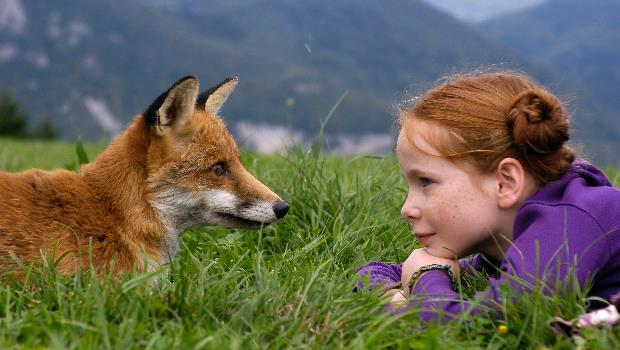 The Fox And The Child Review

Summary: There is some nice photography, but little to entertain even the most easily pleased youngster.

The Fox And The Child is a French film about a .. fox and a child, bought to you by the team behind March of the Penguins. As with their previous effort, its sentimental and annoying, and presumably works better in countries which have never seen the wonder of nature documentaries as bought to you by David Attenborough and his team of inventive obsessives at the BBC’s Natural History Unit, and so are easily fooled by a bit of cutesy photography.

The Fox And The Child isn’t a documentary. It’s the story of a lonely, unnamed girl (Noel-Bruneau), a snub-nosed red head who becomes obsessed with a wild fox which she names Lily. After stubbornly and persistently stalking the animal through the spring and summer, she finally wins the fox’s trust, and the two share adventures exploring the countryside around her farmhouse. What her parents are doing all this time, we never know, but as a consequence she becomes so familiar with the denizens of the mountains of the Massif Central that lynxes and wolves are nothing to her, though she does get a bit nervous when she is forced to spend the night in the forest.

It is a pleasure to see a child wandering about alone, confidently making her own decisions and gaining in confidence all the time. But, as many people do, she makes the mistake of trying to own a wild thing; Lily is surprisingly patient, but in the end even she gets fed up, and its only then that the child learns her lesson.

The film has sparse, badly dubbed dialogue, and an English Language narration by Kate Winslet, sounding thoroughly over-excited. One can only imagine that she did this film to please her children, and look forward to her return to adult roles soon. There is some nice photography, but little to entertain even the most easily pleased youngster.