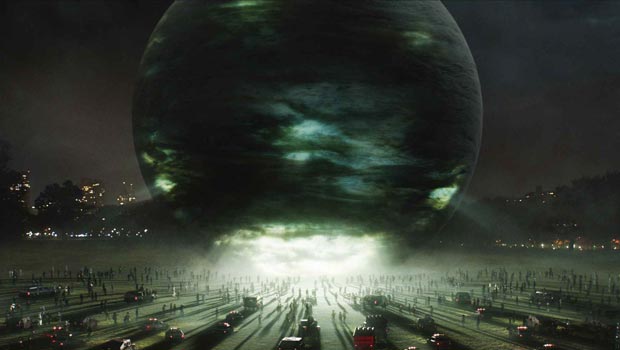 Summary: Watching The Day The Earth Stood Still is like watching any other alien invasion or disaster movie, but at half speed, and will be forgotten quickly.

Wooden acting phenomenon Keanu Reeves sets a new benchmark in his career with The Day The Earth Stood Still, a remake of the 1951 classic sci-fi of the same name. Staring as an alien visitor Klaatu, his vacant stare and dull delivery give him the necessary unearthly qualities to play a decidedly eerie being taking a human form, but combined with a dull script and distinct lack of tension, this end of the world blockbuster passes by almost unnoticed.

The set up to The Day The Earth Stood Still sees Helen Benson (Jennifer Connolly) called in an emergency by the US government as one of many scientists to offer their expertise as sphere-like spaceship speeds towards crashing down in Manhattan. Fearful it could cause destruction on an unprecedented scale, officials are caught off guard when it slows down and lands in Central Park. Helen is rushed to the scene flanked by her fellow professionals and the military and on arrival, a shape comes out of the ship. When a trigger-happy soldier shoots the being, a giant robot cyclops appears to protect it by deactivating all weapons in the vicinity. When the injured form is given medical attention, an outer shell peels off to reveal a human shaped alien named Klaatu who warns there is nothing we can do to avoid some form of invasion which will threaten our existence.

Until Reeves utters his first monosyllabic words, The Day The Earth Stood Still develops the necessary impending sense of doom effectively for a disaster movie. It’s all worrying looks from important people as other alien spheres land on Earth’s surface and offensive plans to strike back at the Cyclops. However, when Klaatu starts talking away time seems to stand still as interrogations attempt to slowly reveal the reasons for the spheres suddenly drawing themselves to our planet. Inevitably Klaatu talks in vague terms and eventually escapes with a little help from Helen who sees the threats being made against him by Presidential representative Regina Jackson (Kathy Bates) as the wrong method of reaching a peaceful conclusion. She sees the only way of saving mankind as being to treat Klaatu as a friend in order to come to an understanding, and gets him out of military hands to get to know him. This might work if watching Reeves and Connolly interacting wasn’t so uninspiring.

Helen and Klaatu ramble on about whether we can ever change our self-destructive ways and how the Earth will die unless we stop damaging it with our modern living so slowly it’s painful. Director Stephen Derrickson has little to play with in these scenes as the two characters talk producing an overly static picture, and even a cameo from funnyman John Cleese fails to inject any energy as everything is so depressingly gloomy. When the obligatory race against time to save the world sequence does finally start, a sudden eruption of special effects try to give the film some semblance of a wow factor for when you leave the cinema, but the sight of trucks and stadiums dissolving into thin air is workmanlike rather than unique. It all adds up to yet another inferior Hollywood remake where imagination and inventiveness is left at the door as it is thought if a film worked once, it will work again. The Day The Earth Stood Still is devoid of character, not least because Reeves is so tiresome to watch, and overplays such obvious clues to the reason for Klaatu’s presence numerous times you will be crying out for something to excite the senses. There is eventually, just a little too late for any of the attempt at emotion at it’s conclusion if to have any effect as Reeves and Connolly drained all that away long ago. Watching The Day The Earth Stood Still is like watching any other alien invasion or disaster movie, but at half speed, and will be forgotten quickly.