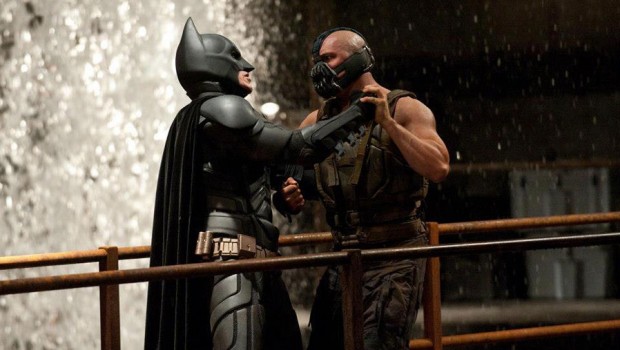 On the bus today I noticed that every other bus was sporting advertising for a comic book adaptation. Many despair at the domination of cinema by films for kids, but there is no reason, no reason at all, why comic books can’t tackle complex issues and challenging ideas. Think X-Men, Persepolis and Maus; even Spiderman works as a metaphor for adolescent angst. Joss Whedon showed this summer that comics could be fun, and now here’s Christopher Nolan back to wrap up the Dark Knight trilogy.

It kicks off where the Dark Knight ended, with Batman (Bale) taking the blame for the death of Harvey Dent, who unbeknown to the citizens of Gotham died as the crazed, vengeful Two Face. Batman was labeled a murderer, but Commissioner Gordon (Oldman) was able to use the lie to set in motion new tough legislation that enables the city to clean up the streets. Batman has won, but the death of Rachel and his rejection by the city that has been his life leaves him traumatised; unable to move on, he has become a crippled recluse, tended for by the faithful Alfred (Caine).

But as Mr Incredible said (I think) good superheroes never really retire, and when a new threat arises, Batman must – and does – rise to the challenge, despite the lack of cartilage in his knees. He even has grey hair, and we are reminded that Batman is not an alien, a mutant, or the victim of a spiderbite – he is just an ordinary man, fighting for what he believes is right. Which in this case is Gotham, threatened by an extraordinary villain in the shape of Tom Hardy’s Bane, built like the proverbial brick shithouse, speaking through a mask which somehow helps him manage his pain.

Bane is a former member of the same League of Shadows that trained Bruce Wayne, and like their leader Ra’s Al Ghul is an agent of chaos, determined to end the corruption of Gotham City. He is also younger, tougher and madder than Batman (madder than anyone, really); his revolution is a weird mix of last year’s Occupy movement and the French Terror, with Gotham’s aristocrats being forced to choose between exile and death, while the ordinary people cower and the criminals run amok.

Christopher Nolan’s Batman trilogy comes to a richly satisfying end with The Dark Knight Rises. It cleverly refers to events from Batman Begins without just recycling the same story. Batman is always an ambiguous figure and his rejection by the people of Gotham is as understandable as it is sad. Still, there are always those who continue to believe in ‘the Batman’ including Joseph Gordon Levitt’s rookie cop John Blake, a fellow orphan.

In many ways this is a companion piece to BB – Bruce Wayne is once again forced to spank his inner moppet, to finally take off the mask and grow up. It helps greatly that he meets his match in more ways than one, as well as Bane he is challenged and intrigued by Selina Kyle (Hathaway), aka Catwoman, a cat burgler as morally ambiguous as Batman himself.

A worthy finale to the trilogy. And all set up for the spin off….