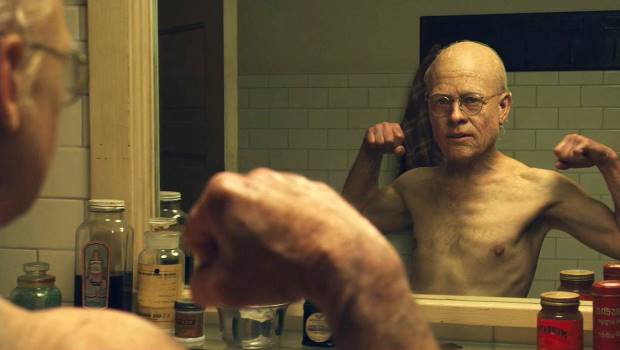 The Curious Case of Benjamin Button is a David Fincher adaptation of an F. Scott Fitzgerald tale of a man who is born old and ages backward. Benjamin (Pitt) is a wrinkly eighty year old baby, whose widowed and grieving father (Statham) abandons him on the steps of an old age home in New Orleans at the end of the First World War, where he is adopted by motherly Queenie (Henson), housekeeper in the home, who longs for a child of her own. No-one expects the hideous thing, arthritic, blind and deaf, to live for long, but to everyone’s surprise the boy grows stronger almost by the day. He is raised with love and affection by the elderly residents of the home, who teach him about death and loss, and by Queenie and her lover Tizzy Weathers (Ali), the youngest people Benjamin knows.

Until he meets Daisy (Blanchett). The granddaughter of one of the long term residents of the home, Daisy is a few years younger than Benjamin, and somehow she sees through the grey hair, glasses and wrinkles to the boy beneath. For the first time in his life Benjamin has a friend, and that friendship is the core of the film. Benjamin grows up, travels the world, has sex, falls in love, and pretty much does all the things everyone does, just that he gets physically younger while everyone around him is getting older.

And that is the core problem with the story; the reverse aging device is actually a bit of a red herring. Great for the visual effects department, it adds little to the film otherwise. Benjamin doesn’t seem to get wiser as he gets younger, he just gets prettier (by the time he’s in his sixties, this effect is quite creepy – he’s the golden Brad of A River Runs Through It, not the more familiar forty-something father of how ever many kids). In every way his life is profoundly ordinary.

The core of the film is the love story with Daisy and this, too, is surprisingly mundane. Benjamin, it is clear, has loved Daisy since they were children; while he is off seeing the world, she studies ballet, moving to New York unto become a professional dancer and becoming something of a bohemian in the process. In her early twenties Daisy is absolutely stunning and a crashingly self-obsessed bore. Benjamin, never having had his youth indulged in this fashion, listens to her rabbiting on with quiet patience, but spurns her seduction attempts (note to self: telling a man you have slept with loads of men, perhaps not the best chat up line in the world); Daisy, used to getting her way, strops off back to New York. Not til years later, when she has been properly humbled, does she get the man of her dreams – but luckily by then he is the perfect age for her and they, for a little while, get their happy ever after.

But nothing lasts. (People repeat this line. A lot. Also ’You Never Know What’s Coming For You’ (caps mine). The script is by Forrest Gump writer Eric Roth… draw your own conclusions…) As Benjamin gets younger, Daisy has to grow up, grow old; what starts as a joke soon becomes reality (will you still love me when I have acne?).

The problem with The Curious Case of Benjamin Button is that it aims for profundity and merely hits homespun wisdom. Benjamin himself remains a curiously blank centre; we never understand how his backwards life affects him and as he is never treated as anything but a harmless oddity, perhaps it doesn’t actually affect him at all. No doctors ever seem to be called in to see him after his babyhood; even when the tugboat he is working on is commissioned into the navy, he isn’t questioned. While the story is a fable, not reality, it is presented in an entirely realistic manner which sets up the contradiction at its core.