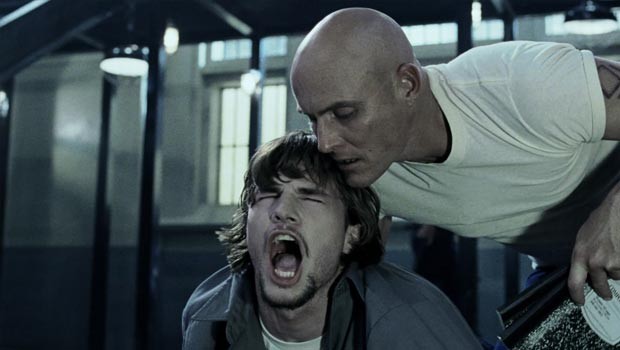 Summary: Not for die hard cynics or those who prefer their plots consistent.

Life-defining moments, eh? Alas, we’ve all had them. Just think what could have happened if I’d said, “yeah, I missed you as well” instead of laughing and leaving the room, all those long years ago. Now Butterfly Effect offers you the chance to go back and change all that.. the downside being you or one of your friends might end up with no arms.

The film reverberates around two (why not one?) key incidents in the childhoods of sweethearts Evan and Kayleigh, and their pals Lenny and Tommy. The old memory loss card is played, to some good effect, as a plot device. Well the first time anyway. Then it happens again… and again… and, yep, again. Ad nauseam.

Its overstated central theme is the arbitrary nature of life, taking Chaos Theory’s ‘butterfly flaps its wings in Brazil and causes a storm in China’ adage and stretching the point to similarly ridiculous extremes. Akin to “if I hadn’t broken my arm and missed that Physics lesson last century I could have discovered world peace instead of still being a dosser” or “if I’d given that girl who came round in 1993 her tea in the good mug I could be discussing life, the universe and everything with that group of sophisticated, influential intellectuals standing over there rather than debating Starsky and Hutch versus the Dukes of Hazard with these plonkers”.

Hollywood always goes for exaggerated drama and unsurprisingly the various scenarios were rather more edgy than your usual ruminating of the ‘what ifs’ over a bag of peanuts. I say edgy, but Butterfly Effect once again takes a concept and does it to death it giving us child-porn, limbless-ness, mental instability, murder, fatal accidents, drug habits, prostitution, sojourns in prison, male rape and devil-worshipping roommates. Ok, ok, so he was just a Goth. Butterfly Effect missed a trick there.

The acting – what can I say? The child scenes had enough ham to provide nutritious fillings for a national school trip’s worth of sandwiches. You may chime in with but they’re only kids, what more can you expect? Please refer to Stand By Me. Or leave the kids out of your movie. Jesse James (Tommy at 13) was good. Kayleigh’s incarnation as a prostitute: very unconvincingly portrayed. Very bad. I don’t know whose at fault – Amy Smart or the directors. They can be equally blamed – Eric Bress and J. Mackye Gruber (the writer director team who previously begat Final Destination II) for making this film what it turned out to be, and Smart for agreeing to be involved in it.

The Butterfly Effect folks did allude to personal responsibility and the repercussions of making wrong choices. But it didn’t dwell on it, preferring to deflect any chance of contemplative thought with awful stereotyping and side-show razzmatazz, completely changing the life of Ashton Kutcher’s character Evan Treborn whenever the pace slowed. However, Ashton and Amy’s not so smart choice in accepting their roles is a good lesson in itself in personal responsibility, or lack of it. They are no doubt quids-in: it’s a box office smash in America. But so was Forest Gump.

Despite all my negativity, the film was great entertainment – quite hilarious in fact, (though as I wouldn’t say this was intentional they shouldn’t really get any credit for that either). But there’s no real reason not to enjoy it if you trade your cynicism in for popcorn, and go with the intention of having a laugh at them rather than in the belief that this is going to be a bona fide horror flick.

The Butterfly Effect is a hybridisation of Memento and Back to the Future, with elements -I’d like to say the best bits… but I’d be lying – of Magnolia and Stand By Me thrown in for good measure. As if that wasn’t enough already it unashamedly copies its key concept straight from the closing tube doors debacle of that cannily named film Sliding Doors.

Did I mention you have to suspend your disbelief? Remember to do that. ‘Cos it sure as hell won’t happen automatically. Not for die hard cynics or those who prefer their plots consistent. Great for sneering at in a supercilious manner.