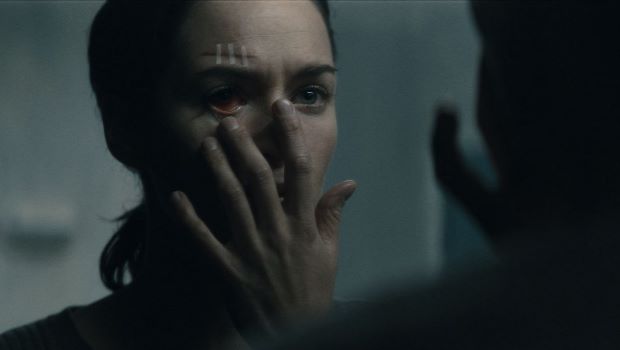 Summary: If you thought breaking a mirror was just bad luck before watching The Brøken, you’ll be thinking twice before dismissing a smash after.

Break a mirror, get seven years bad luck – that’s what the superstitious among us say. The Broken puts a far more frightening spin on the fear of breaking a mirror and presents it in a chilling thriller as one family discover the reflections they once saw only when they gazed at themselves may be more real than they thought.

Eerie goings on are the order of the day for The Brøken, shot with a cold, metallic palette which brings an apt lifelessness to its appearance. Gina McVey (Headey) is a thirty-something who works as a radiologist at a hospital. She puts on a surprise birthday party for her father John (Jenkins) which is going smoothly until a mirror falls to the ground and smashes. It breaks the mood of the party, but with no harm done they clear the mess and think nothing of the incident. The next day things take a turn for the strange, though, as Gina sees what looks like an exact double of her driving past in her own car. When Gina is involved in a car accident and wakes from a coma in hospital, she becomes confused by recent events and has a feeling things are not quite what they seem. It’s just the beginning of an increasingly nasty truth behind the breaking of the mirror during her father’s birthday celebrations.

Seeing someone who looks like you walking past you in the street is enough to send a shiver down your spine, and The Brøken has a similar effect. Writer/director Sean Eillis puts Gina in a bad psychological way, suffering from illogical flashbacks and increasingly convinced that her boyfriend Stefan (Poupaud) is an impostor. Advised by her fellow doctors that she is suffering from Capgras’ Syndrome, a delusional condition, she tries to get on with her life but frequently finds herself unsure of her own mental state. Ellis plays up this unsettling nature by ensuring The Broken is as fragmented as Gina herself with haunted visuals, and the film thrives from the tension generated. She find herself forgetting things and becoming antagonised easily: when Gina becomes lost in a London tube station late at night, a rising score jacks up the unsettling nature of being alone in deserted underground passages. Ellis plays on the unknown long enough so at the point he begins to reveal what seem like truths behind the strange goings on, you can’t be sure of what you’re seeing.

Towards the end, The Broken shifts into more generic horror fare inspired by the recent Japanese style copied so often by Hollywood for endless remakes, but Ellis keeps the story tight in the final reel so as to explain Gina’s condition with a simple explanation that doesn’t disappoint and underlines all that went before. If you thought breaking a mirror was just bad luck before watching The Brøken, you’ll be thinking twice before dismissing a smash after.