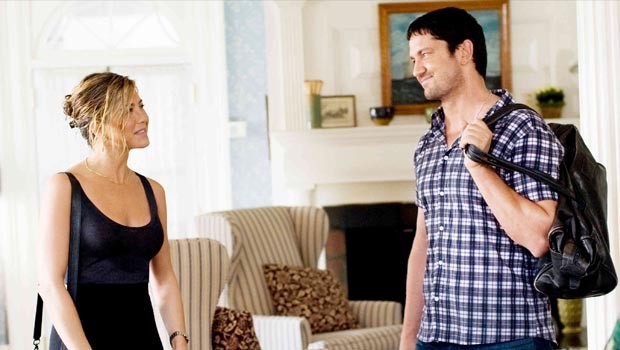 Summary: If you’re happy to settle for whatever half-hearted guff Hollywood decides to push your way, go and see The Bounty Hunter.

Jennifer Aniston and Gerard Butler have an interesting track record between them. They’ve both excelled in their respective fields – she as a brilliant TV comedy actress, he as a powerfully manly leading man – and swiftly descended to churning out awful romantic comedies. Neither has been in a great movie for a good few years; is The Bounty Hunter the one to break that downward trend? You probably won’t be surprised to read that no, it most certainly is not.

The story begins with Jennifer Aniston’s ace reporter Nicole getting a whiff of a possible story from a reported suicide case. In her haste to follow up a lead she skips a bail hearing for a petty automobile incident and ends up, unbeknownst to her, on the wrong side of the law. As chance would have it, Nicole’s ex-husband Milo (Gerard Butler), drunken former cop and bounty hunter for hire, is assigned to apprehend her. Milo jumps at the chance to escape his substantial gambling debts and simultaneously get one up on Nicole, but his simple plan for an easy payday is scuppered as soon as he finds her.

Nicole has no intention of going to prison, and soon convinces Milo that they could make more money by going gambling together, but neither of them have yet realised the more pressing issue, that Nicole’s investigations have made her the target of several shady criminals. If this wasn’t bad enough, Milo’s creditors are equally intent on doing him some damage for non-payment. Is it possible that in the middle of all this craziness the bitterly feuding ex-couple could find themselves back in the arms of love once more? Well, you already know the answer to that one.

This is premium-grade convoluted Hollywood rubbish, but it had the potential, in the right hands – I’m thinking Soderbergh or Spielberg – to make for a great movie caper. Unfortunately the right hands weren’t available, and Hitch director Andy Tennant makes an absolute pig’s ear of the whole thing. This type of multi-stranded narrative requires deft pacing and editing to ensure it is balanced and running smoothly, but here every scene feels as if it’s been thrown on to the screen with no attempt at all to integrate it into a coherent story.

Aniston’s comic talents are thoroughly wasted in Nicole, a character without one notable feature and zero lines of memorable dialogue. The ‘jokes’ that centre on her character mostly focus on the fact that she has breasts (shocker!), and there is one stupidly misjudged moment when a rather average looking woman turns her nose up at the suggestion that Aniston’s character used to be a model. Butler fares marginally better, getting a few funny lines and releasing an endearingly gutteral growlish chuckle every now and then. They don’t fit together onscreen though, and never convince as a couple who have been married. When they finally kiss the moment has all the fizz of three-week old Coke.

The overwhelming impression is that this must be a severely compromised and recut version of writer Sarah Thorp’s original script (at least I hope so, for her sake). Support characters pop up and then disappear unannounced, plot threads are left hanging and the main characters behave schizophrenically, their motivations and affections shifting inexplicably from one scene to the next. The police corruption plot-strand is so badly chopped up that at the end we get a hilarious Scooby Doo-style exposition scene shoehorned in to tie things up. It’s as if Tennant was in the editing room and suddenly noticed that even attentive viewers would be a little puzzled as to how events were resolved.

If you want to see this kind of story done with all the tension, humour and sizzling-hot chemistry it deserves, watch Out of Sight featuring George Clooney and Jennifer Lopez at their best. If you’re happy to settle for whatever half-hearted guff Hollywood decides to push your way, go and see The Bounty Hunter.