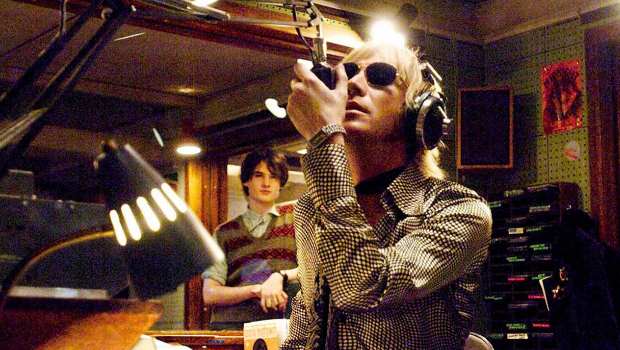 The Boat That Rocked Review

Summary: Its silly enough and well acted enough and amusing enough to pass muster, with an absolutely cracking sixties soundtrack.

Richard Curtis is a bit of a marmite person. On the one hand, he was behind Not The Nine o’Clock News, Blackadder and Bridget Jones’ Diary, and gives generously to charity; on the other he is responsible for a peculiarly horrible, mawkish, sentimental and infuriatingly popular kind of rom com that perpetuates an anachronistic view of Britain as a twee little country where everyone is white, frightfully posh, charmingly neurotic, and distantly related to the queen. This reached an apotheosis in 2003’s Love, Actually, which was a kind of sine qua non of rom-coms, featuring about ten love stories, each one a film in itself.

Curtis seems to have both grown and shrunk as a director in the intervening years. The Boat That Rocked, like Love, Actually, features a large ensemble cast including old chums Bill Nighy, Rhys Ifans and Emma Thompson; set in 1966 it is loosely based on the real pirate radio ship, Radio Caroline. The backstory is this; in the 1960s the only radio station in the UK was the BBC, which played only a few hours of popular music a week. In order to hear the latest hits, we Brits tuned into the various pirate stations which, due to a loophole in the law, were able to broadcast from rustbucket ships in the North Sea. At one point some 25 million people – nearly half of the UK’s population – were tuning in.

Curtis’s fictional version is called Radio Rock, and we are introduced to its jolly crew by Carl (Sturridge), the godson of the station’s boss Quentin (Nighy, self-parodyingly debonair as ever). Sweet and shy, Carl has been expelled from school and sent by his glamorous single mother (Thompson) to find himself; this initially involves smoking dope and watching the djs at work. These include Philip Seymour Hoffman as The Count, whose rivalry with Rhys Ifans’ immoral Gavin leads to a scene very difficult to watch for anyone scared of heights; Ralph Brown wasted as a sort of Whispering Bob Harris type; the very sexy and mysterious Midnight Mark (Wisdom), breakfast dj Simon Stafford (Chris O’Dowd), Flight of the Conchords Rhys Darby as the unpopular Kiwi dj Angus, and Nick Frost as Dave, surprisingly successful with the ladies. And then there’s Felicity (Parkinson) who is the ship’s lesbian cook (she of course is not allowed to dj). Pitted against them is Kenneth Branagh as the government minister charged with bringing down the pirates; his establishment credentials visually signified by his Hitler-like mustache. He employs an assistant called Twatt (Davenport), and I must confess to giggling like a little girl every time Branagh delivered a line like ‘I like you, Twatt’, or ‘Good, Twatt’. I’m sorry, i know, its not big or clever, but it made me laugh.

And that, I guess, is why Richard Curtis is so clever. For every reason there was to dislike The Boat That Rocked – too long, poorly paced, not a lot really happens, slackly directed – its silly enough and well acted enough and amusing enough to pass muster, with an absolutely cracking sixties soundtrack. In these miserably troubled times, maybe that’s enough?