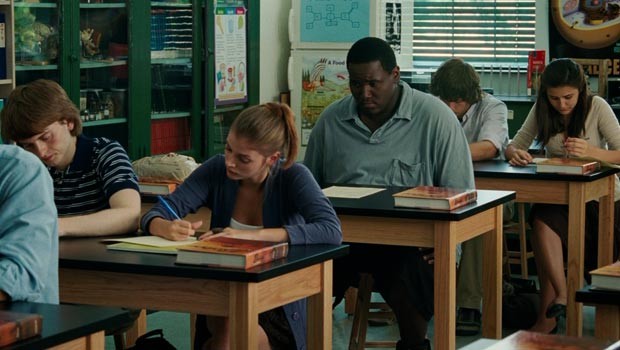 The Blind Side Review

Summary: It’s all a bit too pat and convenient, and sadly, a little bit racist.

The Blind Side is being hailed as Sandra Bullock’s Erin Brokovich moment; certainly she has transformed her appearance with frosty blond hair, immaculate makeup and boosted cleavage to play real-life steel magnolia Leigh Anne Tuohey, and the American public responded. As we speak, she is favourite to win Oscar on Sunday night, and the film is also nominated in the Best Picture category. So, is The Blind Side any good?

Based on a true story, The Blind Side is the kind of film that the academy and audiences like; a rags to riches, triumph over the odds fable. Teenager Michael Oher (Aaron) is barely surviving on his own when he is spotted by Leigh Anne, who in a spontaneous gesture of kindness offers him a bed for the night (the Tuoheys live in a mansion, so they aren’t short of space). Thanks to a family friend and his own sporting abilities, Michael has been admitted on a scholarship to the fancy private school that the Tuohey kids also attend, but the teachers’ duty of care seems to end there. Leigh Anne, who is depicted as an unstoppable force, decides that this isn’t good enough, and from then on Michael becomes part of the family. She buys him clothes, arranges for a tutor, interferes with football practise, buys him a car, and generally takes over Michael’s life.

The first hour of the film isn’t really about football; its much more concerned with Michael bonding with the Tuoheys. This may be a relief to those, like me, who don’t really understand the American game. By the time we reach the stadium, its clear that Michael’s potential has been universally recognised and its just a question of which college Michael will pick… or be ‘guided towards’ by his mentors.

How The Blind Side was nominated for Best Picture I don’t know… to me it felt very ‘movie of the week’. Bullock, to be fair, is very good as Leigh Anne, but the problem is that her character doesn’t change. Leigh Anne begins and ends the film as a well-meaning if bombastic character, utterly convinced of her own rightness. She picks up Michael and brings him home with little more thought than if he were a stray kitten. The film is also astonishingly patronising towards Michael himself; this is not his story, though it purports to be, it’s all about the Tuoheys, who are depicted as the perfect family, kindly, Christian, and completely open-minded. It seems unbelievable that teenage daughter Collins ( Collins) would not have objected, even mildly, to this cuckoo in the nest; also odd that the Tuoheys would not have even a moment of anxiety about unrelated teenagers sleeping under the same roof.

And Michael himself? He is astonishingly passive, allowing himself to be picked up and moved around by this family like a chess piece. We are left to assume that the life he left behind was so awful that he is glad to escape it, but we never see that life, except as a series of blurry flashbacks. The black community, living on the wrong side of the tracks, are stereotypically crack whores and gangsters, with hopeless lives – why wouldn’t Michael want to escape? And yet… it would be interesting to know how Michael feels about being the only black kid in the school. Though a few of Leigh Anne’s friends question her wisdom in taking him in, their objections are swiftly dismissed and its back to business as usual, the Tuohey way. This lack of tension and drams is the film’s biggest failure; nothing bad ever happens. Leigh Anne breezes her way through every situation, always coming out on top, cheerfully driving her BMW into the ghetto and wandering round in her designer clobber is fine, because she’s ‘always packing’. It’s all a bit too pat and convenient, and sadly, a little bit racist.