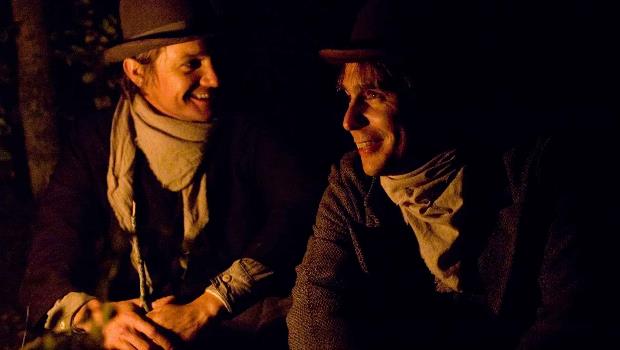 The Assassination Of Jesse James By The Coward Robert Ford Review

Summary: Roger Deakins, who is a genius, has created a stark palette of sepia, black and white – literally painting with light - that chimes perfectly with the melancholy tone of the film and Nick Cave (who has a brief cameo) and Warren Ellis’s score.

It seems odd, in a year which awarded Westerns, and in which critical plaudits went to There Will Be Blood and No Country For Old Men, that The Assassination Of Jesse James By The Coward Robert Ford was so comprehensively ignored, only receiving nominations in the Supporting Actor and Cinematography categories on Oscar night.

Though Brad Pitt stars as Jesse James, the film is less about him than it is about his effect on others; particularly the young Robert Ford (Affleck), an obsessive fan. James himself remains an enigma, the first American celebrity, written into legend as a larger than life new world Robin Hood. But in this reading of the story, James was in fact a suspicious, depressive, brutal killer whose life was shaped by the fall of the South after the American Civil War.

The story opens in 1881. Jesse James is 34 years old, happily married with two children, and living under a false identity while planning his next daring raid. Robert Ford, only nineteen years old, has grown up reading nickel and dime novels of the time, many of which feature the exploits of the James Gang, and he is desperate to join them. Though his brother Frank (Shepherd) takes a dislike to Bob, Jesse lets him join the raid on the Blue Cut Railroad, and allows him to stay on in his house afterwards. But Ford’s hero worship starts to slip over into obsession; at the same times James’ paranoia – for why wouldn’t members of the James Gang betray him, when the reward – $10,000 – is so tempting – splits what is left of the gang.

It may be that the film didn’t do well come awards season because it tells an unusually complicated, messy story; because it has no real heroes – who knows? But it is an extraordinary, visionary and beautiful piece of work, which superlative performances by all the cast – which includes Sam Rockwell as Charlie Ford, Mary-Louise Parker as Zee, Jesse’s wife, and Zooey Deschanel; Pitt and Affleck have never been better. Pitt has all the charisma of a rock star, which is exactly what Jesse James was at the time. The exploration of celebrity culture is fascinating – people rushing to see the corpse, the house where James lived, and to buy the photos of his preserved body.

Bob Ford expected to be greeted as a hero for killing Jesse James and initially he was feted as a celebrity but the public rapidly turned against him – after all he shot the man – his unarmed host – in the back. And tragically his reputation as a coward has been with him ever since; despised by the American public and fearing for his life. Affleck does a superb job of showing hero worship turning to hate – the confusion of the stalker who has created an entirely imaginary relationship with the object of their stalking.

Roger Deakins, who is a genius, has created a stark palette of sepia, black and white – literally painting with light – that chimes perfectly with the melancholy tone of the film and Nick Cave (who has a brief cameo) and Warren Ellis’s score. The only disappointment is that the gorgeously packaged two disk collector’s edition only features a short documentary about the legend of Jesse James, and there is no director’s commentary.

Alternative review:
“I can tell you that the only things preventing this film from being truly unbearable are that Robert Ford, the coward, is played by an exceptional Casey Affleck…” 2/5