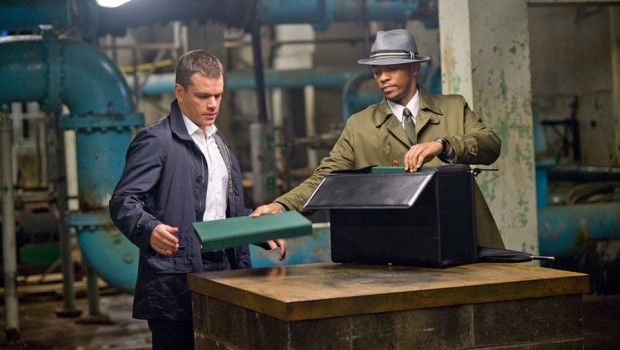 Summary: The Adjustment Bureau offers an interesting sci-fi premise that will intrigue in its metaphysical nature, yet that intrigue is not repaid as the move becomes a glossy, effects-driven love story.

Sci-fi movies and romantic comedies normally split audiences: males go for the technological geekery while females prefer the warm-spirited language of love. In theory, blending the genres should strike cinematic magic that excites both – and that’s exactly what this retelling of a Phillip K. Dick short story attempts. Putting Matt Damon in the shoes of wannabe senator David Norris seemingly watched by shady characters who seem to have mystery powers to prevent him being with his true love Elise (Blunt) gives rise to equal parts sci-fi thinker and plenty of mushy-mushy talk inbetween. Sad thing is, at the crucial moment writer/director George Nolfi loses all subtly and goes for blockbuster effects with a romantic twist rather than give the film the intelligent ending it deserves.

The set up starts like any other political drama with romantic intrigue. Congressman Norris is looking to make up for losses in his battle to become a Senator and runs off to rehearse his speech in the bathroom. A charismatic speaker, he is interrupted when a women, Elise, emerges from a cubicle in a sleek dress and there is spark between them immediately. They joke and almost kiss but he does not get her number. Instead he decides to lay bare the realities of being in the political game before leaving. His speech is a triumph however it seems he may never meet the inspirational Elise again. However, in a mysterious turn of events two men in suits discuss how Norris must spill his cup of coffee at 7.05am. One of those men is left to do the deed but when he fails Norris bumps into Elise on the bus and gains her number. This sets the men in suits in motion and it soon becomes clear they will do anything to keep them apart.

The methods these seemingly normal suited men will go to varies from trying to contrive events to keep Norris from meeting Elise to threatening his life and even drawing on special powers to change their fates. This Adjustment Bureau are following orders which dictate every person on earth has a pre-determined path that they sometimes have to “adjust” to keep them on track: for Norris that means not getting together with Elise as he’s destined to become a major political force while she has a career as a ballerina to enjoy.

Obeying the rules and following orders is not something Norris feels is right, so he sets himself against the Bureau intent on finding out why he can’t be with Elise and as he gets closer, their powers become ever more diverse and sinister – especially when Terence Stamp gets on the scene as the uncompromising Thompson. Teleportation through normal-looking doors, books with your life mapped out and the suggestion quirks of misfortune that happen everyday are really adjustments build into a frenzied finale though just when you think there will be a classic Phillip K Dick sci-fi twist, The Adjustment Bureau’s underlying sloppy romantic side rears its sickly sweet head and sugar-coats the climax. Perhaps this is because writer/director George Nolfi was insistent on taking a 10-page short story of Dick’s and fleshing it out using a love story which doesn’t marry up as effectively as he had hoped. There’s a theme of taking control of one’s own destiny which is uplifting, though the whole Bureau concept is woefully left hanging and holes appear in the plot if examined too closely. The Adjustment Bureau offers an interesting sci-fi premise that will intrigue in its metaphysical nature, yet that intrigue is not repaid as the move becomes a glossy, effects-driven love story.