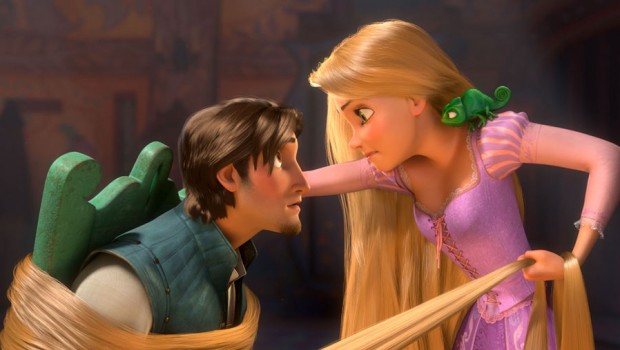 Summary: Tangled has everything.

While Pixar continue to push the creative envelope, Walt Disney Studios have quietly returned to doing what they do best, first with The Princess And The Frog, and now with Tangled. Yes it’s a reversioning of Rapunzul, but anyone dreading a Shrek style smart-aleckyness will be relieved. This is classic Disney; a reworking of an old fairy tale with a nice little feminist touch of female empowerment.

Mother Gothel (Murphy) is a witch on a mission. She is desperately seeking a flower. Not just any flower but one that possesses the energy of the sun – and, with the correct spell, gives the bearer eternal youth. She is thrilled when she finds it, and hides the plant, selfishly keeping it for herself. But when the pregnant Queen falls fatally ill, the King, hearing of the plant, sends his guards to search for it; finding it, they cut it down and give it to the Queen, who makes a complete recovery and in due course gives birth to a daughter with a head of beautiful golden hair.

Mother Gothel realises that the Princess Rapunzel’s (Moore) hair is now the source of the magic, and goes to the palace to steal some. But as soon as the hair is cut, it turns brown and the magic fades. In a world without Botox, she has no choice but to kidnap Rapunzel and keep her hidden away in a tower with no door in a secret valley, where Rapunzel grows up. Now a teenager with a seventy foot long mane of hair, she has never left the tower, and is naturally full of curiosity about the outside world, and especially about the floating lights that she has seen every year on her birthday. But Mother Gothel tells her that the outside world is a savage place, where she won’t be able to cope; best to stay safe in her tower. Mother knows best.

When every studio seems to be jumping on the CG animation bandwagon, with mixed results, Tangled comes as a refreshingly enjoyable surprise; it’s witty and clever and felt like a proper family movie, not one that you take the kids to because you have to (cough Cats and Dogs 2 cough). I adore Pixar and all its works, but the criticism of some of their recent films has been that they aren’t really for children. Tangled has everything – a cute animal sidekick, a dashing male lead (who far from being a prince is a criminal with a price on his head), and a wicked witch to rival the evil Queen in Snow White. There are some great set pieces and some classic comedy, particularly when Rapunzel and Flynn fall into a den of thieves in the local tavern.

There is also a very good message for little girls in the film, that is lightly touched on, not rammed home. Hair isn’t everything you know.