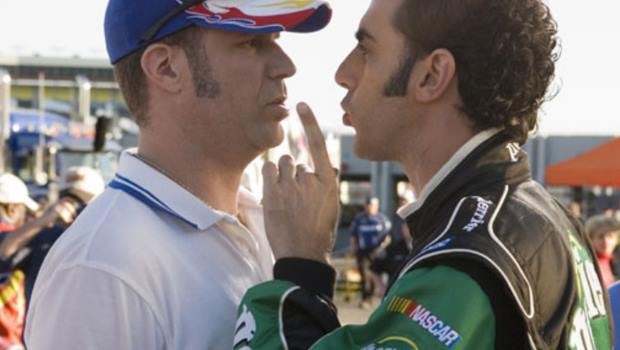 Summary: If you like Will Ferrell, Talladega Nights probably warrants being rented on DVD. In the meantime, watch Anchorman again, or look out one of his earlier films, like Night at the Roxbury.

Some might accuse this film of being xenophobic and homophobic. After all, it stars Sacha Baron Cohen (Ali G to you and me) as a gay French Formula One driver with the most unconvincing French accent since Officer Crabtree in “classic” sitcom ‘Allo ‘Allo. Oh, to still live in an age where Nazis talking about big boobs was considered funny.

To be honest, I’d be quite willing to overlook this if the film wasn’t such a disappointment. Talladega Nights sees Will Ferrell reunited with Adam Mackay, his co-writer on Anchorman, and I was hoping for something as unashamedly amusing. Though it follows a similar template, it has only a fraction of the laughs.

Much as Ron Burgundy is an idiot who’s really good at reading out loud, Ricky Bobby is a stupid man who excels at driving fast. His talent has brought him wealth, fame, a “stone cold fox” of a wife (Leslie Bibb); everything a modern American man could wish for. But his position as the number one driver is threatened when Jean Girrard (Sacha Baron Cohen) decides to travel to America to try his luck at a sport that seems like a poor man’s Formula One (driving souped-up saloons round a circular track and having lots of crashes).

Ricky lives his life by the mantra “if you’re not first, you’re last”, and so he decides to quit racing. The second half of the film then sees Ricky trying to find his way in the non-driving world and, after failing at this, trying to get back into racing.

There are flashes of the comedy genius that has made Ferrell the star he is today, such as the scene where Ricky tries to conquer his fear of driving by getting into a car containing a wild cougar. But these parts are few and far between, and it’s sad to see a comic with a gift for improvisation using the same material repeatedly within a single film, such as happens in Talladega Nights with the invisible fire routine and “shake and bake” catchphrase.

If you like Will Ferrell, Talladega Nights probably warrants being rented on DVD. In the meantime, watch Anchorman again, or look out one of his earlier films, like Night at the Roxbury.