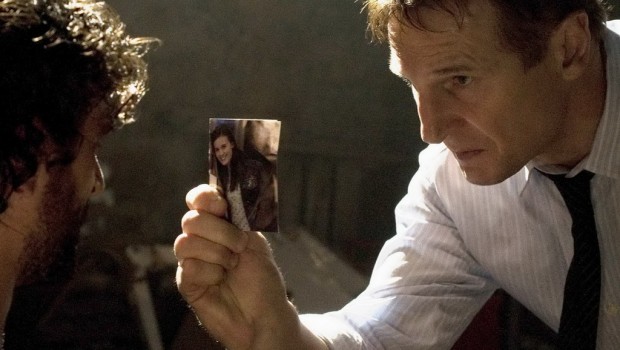 Summary: Taken is a joy to watch with its big heart and a pulse to match.

Few would expect to see refined actors such as Liam Neeson going on a ruthless killing rampage Jason Bourne-style, but that’s exactly what happens in Taken when a former government spy embarks on a manhunt for his abducted daughter. Densely packed with genuine emotion, you’ll be cheering him on as he uncovers a human trafficking ring in France and fights his way through the many minions who fuel the trade in this effective thriller.

Bryan (Neeson), a retired government spy, gave up work and moved to be close to his 17-year-old daughter Kim (Grace) following years of neglect due to being away on business. Divorced from her mother, Lenore (Janssen), he now competes for Kim’s attentions with Lenore’s rich husband who can afford a pony for Kim on her birthday to overshadow his modest gift of a karaoke machine. When Kim asks Bryan if she can go to France for a vacation, he initially refuses but backs down under pressure from Lenore: all he asks is she stay in contact every day. However, when Kim is kidnapped on arrival in Paris, the gadgets come out as Bryan goes into spy mode to track her down and paving a path of destruction fuelled by an obsession to make those responsible pay with their lives.

Neeson steps up the challenge of injecting genuine emotion into what could have been a throwaway action flick exceptionally well. There’s never any doubt Bryan means business every step of the way thanks to his steely glare and deadpan delivery. From the moment Kim tells her there are strangers in the French apartment, Taken zips along without a pause for breathe, driven by Bryan’s commitment to the cause and quick thinking. There are a few moments when the plot skirts around logic such as Bryan’s ability to find the right people at every turn, however you’ll be so caught up in willing him on that it’s easy to look part them. Far more engaging are the gritty, Bourne-esque action scenes which see Bryan take on houses full of armed bad guys, steal and smash up cars and jump through glass windows: I never thought Neeson had it in him. Yet, what really sets Taken apart from so many other wild action thrillers is the depth of emotion Neeson brings to the role as a devoted father who wants his daughter back safe at home and willing to take no prisoners in the process. It’s strong emotional engagement even drew a unanimous round of applause at a crucial moment during the screening I attended.

Coming from Luc Besson and Robert Mark Kamen who have worked on numerous disposable offerings such as The Transporter films and green director Pierre Morel (his only other full director credit was on the free-running actioner District 13), Taken is a surprise success. There is a wry sense of humour about Taken too when Neighbours-turned-pop-star-turned-movie-actress Holly Valance appears as a successful singer to offer advice to Bryan about Kim pursuing a singing career, however this ties in nicely with the family moments bookending Taken which enable it to deliver such a powerful punch along with the action. After a lot of shoddy one-man-army movies trying to ape Jason Bourne’s approach, Taken is a joy to watch with its big heart and a pulse to match.